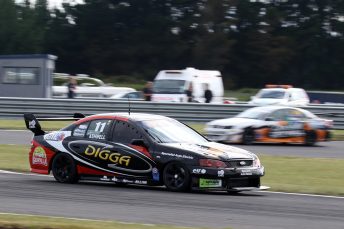 When round three of the BNT V8s gets underway at Ruapuna next week (January 13-14), local driver Justin Ashwell will be looking to get himself further up the grid by the end of the weekend.

Sitting fourth in class two points and the highest placed of the rookie drivers the 38-year old is pleased with his progress in the championship thus far.

“Myself and the team very pleased with our progression and the banking of points was our priority at each of the first two rounds. We are mindful that the racing will be tight this year,” says Ashwell.

“We are still somewhat sorting out the car, the slightest of changes can tip it either way. Still a bit away from other cars we suspect.”

Round one at Pukekohe greeted drivers with torrential rain, with Ashwell being pleased he emerged from the weekend unscathed.

“I’ve had a number of wet races in Invercargill mainly. The back straight at Pukekohe was the worst Ive seen, but yes happy to finish without damage.”

Ashwell has limited experience at the majority of the circuits the BNT V8s Championship visits, but says racing at his home track, Ruapuna, will give him a little bit of extra confidence and allow him to focus on developing the car throughout the weekend.

“Knowing the track will helps us, it means you can focus on developing the car instead of learning the circuit for the weekend. This will also give us a better gauge on other cars in comparison to ours.”

Ashwell has been knocking on the door of race and round podium in the first part of the season and believes a little bit of extra qualifying speed is what he needs to close out some improved results.

“Qualifying is probably where it’s at. If you can be at the front to chase or lead, not only is the racing good, you can see where the front runners put their car. To close out a race win, we need some more speed. We are working on that.”