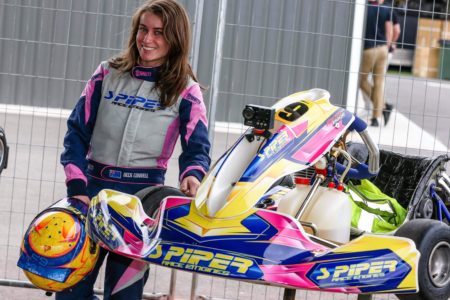 CHE Racing has announced the three drivers who will take place in next Wednesday’s Evaluation Day, with Karting Australia Ladies Champion Beck Connell, Legend Cars competitor Mia Bolton and karting and rallysprint/supersprint star Jaxon Fraser all earning the opportunity to turn laps in one of the team’s Mygale Formula Fords at Wakefield Park.

The car has recent success, with Tom Sargent driving it to victory in the most recent round of the NSW Formula Ford Championship last weekend.

Connell comes into the test day with impressive credentials in the karting scene; in addition to her Ladies Champion title in 2019, she has also been a NSW State Champion and was the first female driver to win the coveted Dubbo Gold Cup. Connell has also known CHE Racing coach Cameron Hill for many years, having competed against him in karts.

“I’ve had a lot of experience in karting, but I’m aiming to enhance my knowledge of race cars – it’s something that really interests me,” Connell said.

“I’ve known Cameron since we were kids competing in karts together, and I’ve been very impressed with what he’s achieved in Formula Ford and Porsche Carrera Cup – I’ll be looking to learn as much as I can from him.

“Apart from driving the car, there are also the aspects of understanding car setup and analysing data; it should be a very educational experience.”

Bolton is also well-known to the CHE Racing Team, having raced against current Formula Ford drivers Tom Sargent and Noah Sands in karts. The team has also fabricated some components for the vehicle Bolton currently races in the Legend Cars Australia Series.

“I’m looking forward to the experience of testing another car – I’ve never driven an open-wheeler before,” Bolton said.

“I think Formula Ford can definitely open pathways and it’s a great learning curve for anyone who wants to be serious about racing. I’m excited for the chance to drive one of the cars and soak up as much information as I can.”

While he is only 15 years old, Fraser has already amassed significant motorsport experience; in addition to top-three championship results in the Combined Districts Kart Club cadet classes, he has also competed in tarmac rallysprint, supersprint, motorkhana and khanacross events across NSW.

“The supersprint and rallysprint events are not quite as intense as karting, because you’re not competing wheel-to-wheel with other drivers, but they’ve taught me a lot about full-sized cars,” Fraser said.

“I’ve been driving a Mazda MX5 and I think some of the things I’ve become accustomed to, like changing gears, will help me adapt to the Formula Ford.

“From what I’ve seen, Formula Fords are cars you have to drive on the edge to get the best out of them, so I’m looking forward to that challenge.

“I’m nervous but I also can’t wait to get out there. It will be a different type of car for me to adapt to, which will be valuable for my development as a driver.”

“We’re stoked with the level of interest we’ve had for the evaluation day, as demonstrated by our drivers who come with a diversity of experience across different categories,” Hill said.

“All three of them bring different skills to the table and I’m looking forward to seeing how they go in the Formula Ford.”