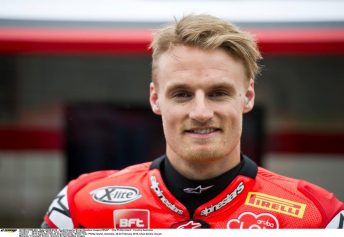 “We’ve been close to winning in the past couple of years, but lacked a bit of top speed and I ended up losing the front in the last lap of race two trying to stay ahead,” Davies said. “It used to be a difficult track, but now it suits both me and my bike so we’re aiming at the big trophy.”

And if there’s one rider who reigning WorldSBK champion Jonathan Rea (Kawasaki) will fear at Phillip Island it’s his fellow Briton.

Davies completed the 2016 season in a blaze of glory, winning seven of the last eight races and the final six, on a Panigale 1199R he says was a “pleasure to dance on the limit” with.

“It was obviously awesome and slightly unexpected to win all those races,” said Davies. “We knew we were in good shape, but winning seven out of the last eight isn’t like winning just one.

“I surprised myself, things were just flowing nicely. It gave me satisfaction because Kawasaki won a lot in the past few years and that turned things around a little bit.

“Jonathan rode hard as ever in Qatar, when there were no championship implications, and we still managed to take the win. It was a good end of the year and we want to keep the ball rolling.”

Davies said it was a real team effort to get the Panigale R into a package which suited his style.

“It was just a pleasure to ride the bike… being literally millimetres from crashing in every corner but also just having the feeling at that level where you’re not crashing and the confidence is sky high. I’ve never had such a feeling, on any bike, ever before.”

Davies’ winning streak in 2016 now has him only three behind the record of nine wins in succession jointly held by American Colin Edwards (2002) and Briton Neil Hodgson (2003). However, the just turned 30-year-old isn’t really thinking about breaking records.

“It’s not a stat that I’m aiming at re-writing. If it comes, it comes. It’s race wins that matter, so that would just be an extra bonus. I’m proud of what we did at the end of 2016, but I’m not particularly concerned about the streak.”

With two days of pre-season testing still remaining at Phillip Island (February 20-21), Davies has described his build-up as “nothing too special”.

“Sometimes it’s just the nature of testing, but I am impressed with the list of upgrades Ducati has brought to the bike,” he said. “We still haven’t put the whole package together, but that’s what the tests in Phillip Island are about. That’s where we’ll see the results of our homework.”

WORLD SUPERBIKE TICKETS
To purchase tickets and camping for the Yamaha Finance round of the 2017 MOTUL FIM Superbike World Championship visit www.worldsbk.com.au or Ticketek call the Superbike hotline on 1300 728 007 for tickets and general event information.