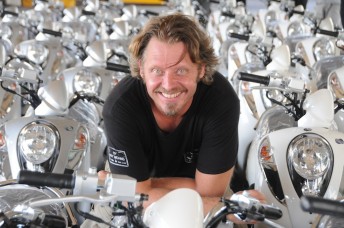 The modern day adventurer, motorcycle fanatic and entertainer, Charley Boorman will be live on-stage during the 2014 Australian Motorcycle Grand Prix event at Phillip Island this October.

The award winning TV star will share his experiences from on and off the beaten track, including incredible behind-the-scenes stories from his TV series, ‘Long Way Round’ and ‘Long Way Down’ alongside Hollywood actor Ewan McGregor and his more recent adventures, ‘Race To Dakar’, ‘By Any Means’ and ‘Extreme Frontiers’.

Fans will have the opportunity to see Boorman on either Saturday or Sunday of the event, with two 90-minute shows scheduled for the weekend in a customised facility.

Australia has been the launching pad as well as the final destination for a number of Boorman’s adventures – but his travels have never lead him to Phillip Island for the Australian Motorcycle Grand Prix, the ultimate pilgrimage for any motorcycle rider.

“I’ve seen some amazing places on my travels around the world, but from what I’ve heard Phillip Island is one of the most naturally beautiful places in Victoria, and having a MotoGP event with that type of backdrop is just incredible,” Boorman said.

“MotoGP is the pinnacle of bike racing and to have the opportunity to perform my live show at the event and combine it with the chance to see some great racing is something I’m really looking forward to.

“I’ve had some incredible experiences on the road, especially on two wheels, so the show will give fans a glimpse of what happens behind-the-scenes with exclusive footage to keep everyone on the edge of their seats.”

Australian Grand Prix Corporation CEO, Andrew Westacott, is looking forward to welcoming Boorman whose charismatic ‘let’s just do it’ approach has won him fans all over the world.

“Charley Boorman is everything that the Australian Motorcycle Grand Prix is about – entertainment, adventure, travel and most importantly, motorcycling,” Westacott said.

“To confirm Charley Boorman Live presented by Spokes as a key part of the entertainment line-up at Phillip Island in October is very exciting, and it will give fans the chance to experience something entirely different at the event.”

The Transport Accident Commission (TAC) has been a long standing partner of the Australian Motorcycle Grand Prix and TAC Chief Executive Officer, Janet Dore is excited to have an international TV and film identity at the event to support its message for riders to expect the unexpected on the road.

“The MotoGP is a great chance for the TAC to talk to riders about ensuring their skills are up to scratch in case the unexpected happens,” Dore said.

“The TAC has been a longstanding supporter of the Australian Motorcycle Grand Prix and to have someone like Charley appearing as part of the entertainment line-up will be a real highlight this year.”

For tickets and more information on Charley Boorman and the 2014 Australian Motorcycle Grand Prix, please go to www.motogp.com.au