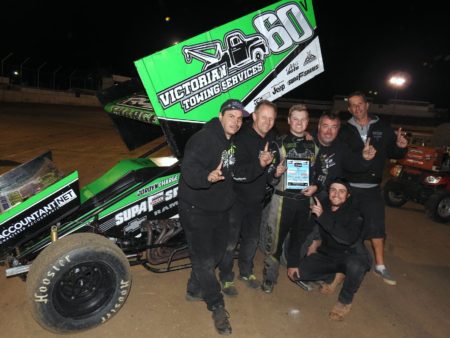 In last weekend’s Triple Crown Series double header for 360 Sprintcars at Warrnambool’s Premier Speedway and Geelong’s Avalon Raceway, youngster Jordyn Charge managed to come away with career-best drives that saw him claim the spoils in the opening two rounds.

After dominating Friday night’s opening Triple Crown Series round at Premier Speedway with a near-perfect run, Charge backed up that form the following night at his home track – Avalon Raceway – by scoring a come-from-behind victory in the second round.

For Charge, he was thrilled to get his maiden feature-race win at Premier Speedway and to do it in such dominating fashion, where he qualified on pole position for the feature race and went on to lead the entire 25-lap distance, made it even better, while at Avalon Raceway, he managed to overcome a position seven start in the feature-race field to finish the 25-lap in strong fashion, which saw him pass veteran Grant Anderson for the lead at the end of the penultimate lap and went on to score an impressive win.

“To win one feature race was wonderful but to win two (feature races) capped what was an amazing weekend for the team and I,” expressed the 21-year-old racer from the Melbourne suburb of Melton in Victoria.

“I had a great run at Premier Speedway, and to be able to enjoy the type of night where pretty much everything went accordingly to plan was a wonderful feeling and I’m proud of the fact that I picked up my first Premier Speedway feature-race win, especially since it’s one of the country’s leading tracks.

“The following night at Avalon Raceway, I went into the night with my confidence high, and I was hoping to back up the previous night’s form, and that’s what I managed to do. Despite starting the feature race from the fourth row, I was confident in my car and as the feature race went on, the better the car and I were as I was running the bottom of the track strongly. To be able to catch and then pass a talented and experienced racer like Grant (Anderson) for the win was incredibly special, and what made it even more special was that it my first feature-race win at Avalon Raceway and the fact that it was in front of many of my family and sponsors.”

Charge’s 2020-21 season campaign has seen him run the bulk of 410 and 360 Sprintcar race meetings within his home state of Victoria aboard his Vic # 60 Victorian Towing Services / SupaF Spares supported Maxim car. Prior to last weekend’s double wins, Charge’s best performances occurred at Premier Speedway with a pair of fourth-place finishes – including during last month’s third and final Easter Trail round.

With the 2020-21 season close to wrapping up, Charge has two race meetings remaining on the schedule, with this Saturday night’s All Stars event at Nyora Raceway and then the third and final Triple Crown Series round at Simpson Speedway on the Sunday afternoon of May 2.

Charge and his team would like to thank their 2020-21 season sponsors: