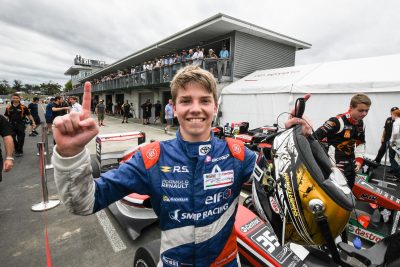 Toyota Racing New Zealand will consider making some changes to the country’s premier motor racing series after a close battle between the top three drivers over the last five weeks.

With the new management team now settled into their positions at the company which co-ordinates the series, Toyota New Zealand’s Motorsport Manager Mark Whitaker said they would review the season and look at what changes might be made.

“We are not going to make changes for changes sake, but certainly if there are improvements to be made that will drive things.”

Mr Whittaker said a review process would take place and it would be several months before the details of the 2019 Castrol Toyota Racing Series would become public.

One thing that will change is the driver recruitment process, which will start much earlier this year than it did in 2017.

“If we can get more young drivers considering a northern hemisphere off season racing in New Zealand at the start of 2019 then we should get a bigger field like we had in 2016 and 2017,” said Mr Whittaker.

Some international drivers have already expressed an interest in returning again in 12 months’ time.

“We tell all the first-year drivers they should look at it as a two-year proposition,” said Mr Whittaker.

“The first year they get to drive and learn our tracks and get used to the cars.”

He pointed out that not many of the past champions were successful on their first attempt at the Castrol Toyota Racing Series. “Most didn’t set the world on fire the first time, but were very good the second and third years.”

With a points system that rewards consistency, this summer’s series had its second tight battle in as many years, with the result not decided until the final lap of the last race, the Grand Prix at Manfeild.

Shwartzman won only one race – the Denny Hulme Memorial Trophy – but was the most consistent.

Verschoor with six wins and more pole positions than anybody else, was arguably the fastest driver, but one retirement at the opening round saw him fall five points short. The 17-year-old was the only driver to win two feature races, the Grand Prix and the NZ Motor Cup at Hampton Downs.

Marcus Armstrong had led the points standings from the first round at his home track at Ruapuna Christchurch, where he won twice, but lost the title on the last lap at the Grand Prix and came home ten points behind Verschoor.

Shwartzman and Armstrong will both drive for the same team Prema Racing, in the European Formula 3 Championship this year, while Verschoor and Clement Novalak, who also had two wins will be team-mates contesting the Renault 2.0 Euro Cup.