Championships on the line in Melbourne this weekend

Championships on the line in Melbourne this weekend 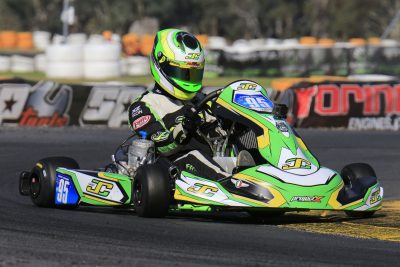 Australia’s top kart racers are getting set for a huge weekend with the final round of the 2018 SP Tools Australian Kart Championship, presented by Castrol EDGE being contested in Melbourne.

The Port Melbourne circuit is the traditional home of the Grand Final of the Championship, and has seen many a title go down to the very last race – this year is expected to be no different.

With former Champions including the likes of Formula 1 star Daniel Ricciardo, Supercar Champions Jamie Whincup and Mark Winterbottom, along with many of their colleagues, there will be a significant amount of young talent on show.

In the elite KZ2 Gearbox class, Melbourne local Aaron Cameron holds a narrow lead in the standings over Queenslander Troy Loeskow and reigning Champion Joshua Fife. Cameron won the corresponding round two years ago in his first year in the class, and will be aiming for a similar result on his home track to secure his maiden Australian Championship this weekend.

Only a handful of Tasmanian drivers have enjoyed success on the National Karting stage, the most notable being Marcos Ambrose in the mid-nineties. Launceston teenager Lachlan Dalton is on track to become the first Tasmanian driver to claim a National Championship in the elite KA1 category this weekend. Dalton holds a 29-point buffer over Gold Coast youngster Broc Feeney in the standings. Third generation racer Josh Denton is currently third.

CRG driver Pierce Lehane has won the past two rounds in the X30 class but after missing the opening two rounds in class won’t be able to stop Cody Gillis from claiming the title. The Sydney-sider has one hand on the trophy with Harrison Hoey the only driver in with a mathematical chance at snaring the top spot from his grasp.

In total, there will be 270 competitors from every state of Australia, along with visitors from New Zealand, America, Singapore and Malaysia, in action across nine categories.

The youngest drivers will be seven years of age in the Cadet 9 class where Melbourne’s Lewis Francis leads the points.

Practice begins on Friday ahead of qualifying and the heat races on Saturday with the finals to be contested on Sunday with the Champions crowned in a Gala Awards Dinner at Etihad Stadium on Sunday night.

The Port Melbourne Karting Complex is located on the corner of Todd Road and Cook Street, Port Melbourne. Admission for spectators is free.