Championship rivals out to test friendship at Willowbank

Championship rivals out to test friendship at Willowbank 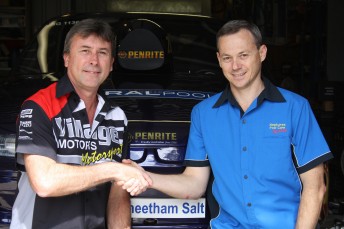 Close friends and fierce competitors Dave Gauldie and Simon Isherwood are separated by just a single point in the battle for the Willowbank Raceway Super Gas Queensland Drag Racing Championship – which continues this Saturday August 16.

This weekend’s fifth of seven rounds for the QDRC follows a weekend of Nostalgia Drag Racing action at Queensland’s premier drag racing facility – for full results from that event, please see further in this press release or click here.

Between them, this competitive pair – who are both based in Kallangur on Brisbane’s northside – have won every Super Gas track championship that has been held, holding three titles apiece.

When it comes to the 2014 title battle, Gauldie is currently leading the way with 81 points over reigning champion Isherwood’s 80, with three rounds left to run. So far this year, Isherwood has enjoyed two event wins from three finals appearances, while Gauldie has two wins from two finales.

While they may be close friends – Isherwood even sponsors Gauldie’s race campaign through his business Neptune Pool Care – friendship goes out the window when it comes time to compete for the win.

“I definitely want to keep the title and it is a constant battle – Dave and I are great friends, we are practically team mates,” said the 42 year old Isherwood who is supported on-track by Astralpool, Penrite, Newline Pool Products, Zok Race Carbs, Cheetham Salt and Kohr Motorsports.

“While we have been close friends for around seven years now after meeting through this bracket, you can be guaranteed that neither of us will be giving an inch right to the end of the season!”

For Gauldie, facing off against his buddy encourages his competitive edge.

“We are friends off the race track, but when it comes to racing I do find I step it up a bit and concentrate more on doing the best run I can when I am facing off against him. I always tell him he brings out the best in me on the track,” said the 48 year old Gauldie, who is a Sales Representative and supported on-track by Village Motors, Zok Race Carbs, Neptune’s Pool Care and Matt’s Performance Paint Shop.

“Having said that, you can’t let your guard down with any of the Super Gas racers at the moment, you have to be looking for your best run against every single car that is out there right now, it is that close.”

Over its first four rounds, the 2014 season has thrown up challenges for both racers.

“The Super Gas bracket is very close, there are no easy wins and while we may be small, we are all extremely competitive,” said Isherwood, who races an Australian-built, left-hand drive VR Commodore powered by a big block Chevy.

“I had to have a hernia operation around Easter which put me on the back foot, but I am now feeling much more on top of everything physically and mentally and the last two rounds have been really great for me with two finals appearances.

“I am looking forward to getting back out on track this weekend and trying to keep that run going, I have to say a big thanks to my wife Connie, my sons Oscar and Tom and my good friend David Knight – also my engine builder – for all their work crewing on my car. They all love it and Oscar has even taken it a step further by competing in Junior Dragster for the first time this year.”

While the pair are only separated by one point currently, Gauldie did have a more sizeable lead on Isherwood until recently.

“For me this season it has been a case of swings and roundabouts – some meetings are good and some are not so good. Heading to the last round I had something like a three round gap on Simon and then he went all the way to the final and we only won one race, so he was able to claw back the lead I had struggled so hard to build,” said Gauldie.

“We will just go out there this weekend and do the best we can, we have a really good car and this year we debuted a new engine which has seen us become one of the quickest Super Gas cars out there, which has required a change in driving style but is really delivering.

“For me, I have been racing for 30 plus years and I have seen the sport go through a lot of evolutions, but for me I still love racing today as much as I did on the day I started. The sportsman level of racing is the sweet spot for me as we get to do a lot of racing and it allows me to race within my means, while enjoying the fantastic Round Robin format of racing and the Pro Tree in our ‘baby pro stockers’.

“We all enjoy it, including my wife Stacey who has been a big part of my racing team since day one and now also my son Cameron (20 years old) and my daughter Kristin (18 years old) who are now helping out as part of the crew.”