Formula Masters China Series battle to heat up at Penbay

Formula Masters China Series battle to heat up at Penbay 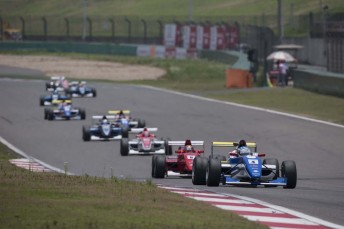 MEDIA RELEASE: Formula Masters China Series (FMCS), the region’s leading international single-seater championship, is back in action this weekend for its debut triple-header at the Penbay International circuit in Chinese Taipei.

For the international field of fledging talent, Races 7-9 present the perfect opportunity for the young drivers to shine as the competition for the 2015 FMCS title heats up.

The championship’s debut on the 3.5 km Penbay International Circuit marks the first of two new tracks for the 2015 season and creates a level playing field amongst the 18 drivers and a test of talent, speed and racing smarts.

As the 2015 season approaches its mid-point, the race will be on to see who can first master the new track and maximize valuable championship points.

With two wins last month in Shanghai, Estonian Martin Rump (19) of Cebu Pacific Air by KCMG leads the overall drivers’ classification by just a single point over Meritus.GP driver Jake Parsons (20) of Australia, who took the final win in Shanghai.

The pair is expected to again battle for podiums, but there are plenty of drivers hot on their heels.

Fellow Australian Aidan Read of Eurasia Motorsport is, at 16, the youngest driver in the field and is currently third in the championship, having finished in the points in each of the six races.

Malaysian Daniel Woodroof (19) of Meritus.GP reached the podium twice in Shanghai and is fourth on the leaderboard, while Cebu Pacific Air by KCMG driver Nicholas Rowe (17) of Australia is fifth, having finished runner-up to team mate Rump in the opening race in Shanghai.

This weekend’s two qualifying sessions and three races illustrate the championship’s aim of providing plenty of track time in order to help drivers establish a solid motorsport foundation that will last them throughout their careers.

And with 55 points on offer, FMCS fans can expect an action-packed weekend of hard-fought racing that will leave them at the edge of their seats.

“The competition throughout the field continues intensify and as we saw in our opening races in Malaysia and last month in Shanghai, the close racing shows the level of talent in the series,” said Dominic Lyncker,

Head of Group Sports Cars, Motorsport and Car Culture, Volkswagen Group (China). “The additional challenge of a new circuit creates a level playing field amongst the drivers and an opportunity for them to shine. We look forward to a weekend of hard-fought battles and junior formula racing at its best.”