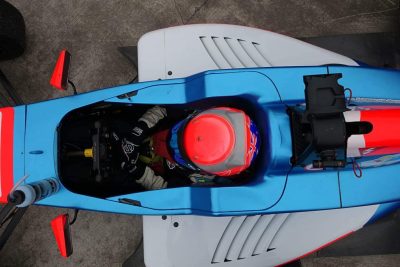 Rapidly rising star, Kurt Hill is keen to continue his impressive championship campaign this weekend as the Asian Formula Renault series heads to Ningbo, China for round three. Currently lying in a strong position in the standings, the talented young Australian driver won’t be letting his title fight affect his mindset as he prepares for this event though.

“Being in the championship battle is great but it doesn’t change my approach to racing each week, as what’s worked to get me here will also help keep me here and push ahead. Rather than focusing solely on each race, I tend to focus on the bigger picture of what I want to achieve from the season, and how I can build towards that from each weekend,” explained the 21-year-old.

Former speed-skater, Hill, has certainly made his mark on the competitive Asian racing series with two podium finishes already to his name, and admitted that he’s thoroughly enjoying racing the AFR cars. “I love driving the formula Renault, as it really suits my style. It requires a light touch on the steering wheel which is something that I’ve always been quite good at right from the start of my career. Requiring that smooth style also means that the car rewards good driving. The AFR series in general gives me a great opportunity to compete on world class tracks and learn what I need to progress through to the highest level of motorsport.”

The remote, 4.015km/2.494mi, 23 turn Ningbo International Speedway, was only opened in August 2017, so will be new to all the drivers in the AFR series. In typical laid-back style, Hill isn’t phased by the challenges a new circuit presents.

“Nobody in the series has been to Ningbo before so it’s a new circuit to everyone. I think it will suit me pretty well though, as it’s quite a busy lap. It’s quite short and twisty, so it’s going to reward someone with their head screwed on who has prepared properly. I’ve been preparing the same as usual, doing diligent research and building strong points to work from when I get to the track. This gives me a good base, and means I don’t have to think too much, allowing me to focus on the more important aspects of developing the car over the weekend.”

Hill, who drives the brightly liveried #96 Eurasia entry, is also enjoying the close, intense racing in the AFR championship, although he openly admits that smooth, easy victories would be nice too.

“The series definitely produces really close racing with very unpredictable results. We’ve had six different drivers on the podium over the first two race weekends, which makes it good to watch from the outside. But while wheel-to-wheel battles are always fun and there’s a lot to be learned from that kind of situation, it’s always a lot more fun to claim pole position and scoot off into the sunset!”

With long breaks between races, the Sydney-born racer has been soaking up as much racing action as possible, constantly learning from he peers. “I think it definitely helps to keep up-to-date with what’s happening in the motorsport world and watch as much footage as you can. You never know what you can learn from watching, and sometimes even critiquing, other people and working out how or where you could do better. It’s always a learning process in motorsport.”

Round three of the Asian Formula Renault Championship takes places at Ningbo International Speedway on 26-27 May.