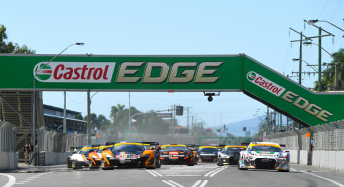 The 2017 CAMS Australian GT Championship heads to Townsville for its penultimate round of the season this weekend (July 8-10), with the battle for the championship set to take centre stage.

The Australian GT Championship has already visited three states across the width of the country and now heads north to Queensland for its fourth appearance at the Reid Park street circuit.

Just 28-points separate the three leading three contenders, while mathematically the competition remains wide open with more than 400 points still up for grabs across the final two rounds.

The most recent winner is Tony Walls, who headed the field in Race 2 last year aboard the Objective Racing McLaren 650S GT3.

The former race winner returns aboard the immaculately turned out McLaren, one of three entries from the British marque in the field.

Tony Quinn will also steer a McLaren, the Scot taking control of the Darrell Lea entry which Klark Quinn last year took to victory in the opening race.

Completing the trio of British entries is Fraser Ross, who will again take control of the Total Opticoat McLaren 650S GT3 for YNA Autosports and McElrea Racing.

Three Lamborghinis will fly the flag for Italy, with Roger Lago leading their charge aboard his iconic black JBS Australia entry.

Tied on points for second in the Championship, it will be a crucial weekend for the Queenslander’s title aspirations.

The ranks are filled not only with the ever-green Lamborghini R-EX but also Lamborghini Huracan GT3s, such as that Andrew Macpherson and Brad Shiels will share for AMAC Motorsport.

The mix of machinery, from the world’s leading automotive brands, continues with Mercedes, Audi, BMW and Porsche all well represented.

Leading the charge for BMW will once again be Steve Richards and James Begmuller in the mighty BMW Team SRM M6 GT3.

However, their lone entry will face the might of Mercedes, which boasts four of the latest Mercedes-AMG GT3s.

Scott Taylor is ready to take charge of the Scott Taylor Motorsport entry, while across the garage Max Twigg will pose a challenge aboard the WM Waste Management Services entry.

Down the pit lane, Eggleston Motorsport will run Tony Bates in the Moveitnet/AFS entry which claimed two race wins around the streets of Adelaide earlier this year.

The final Mercedes entry belongs to Mark Griffith, whose Hogs Breath Café/Griffith Corporation team have proved themselves as some of the most strategically astute in the field.

Looking to halt that charge will be a quartet of Audis, which include the experienced James Koundouris and the rapid Ash Walsh in the Supabarn Supermarkets Audi R8 LMS.

Though a winner at Townsville at the wheel of a Supercar, Walsh has never raced GT3 machinery at Reid Park, nor has stablemate Kelvin van der Linde.

The young South African, who has claimed victory twice this year with Geoff Emery in the Valvoline Jamec Pem entry, with Emery also heading to the Queensland circuit for the first time in an Audi.

Rejoining the Audi Sport Customer Racing Australia outfit for the weekend is Marc Cini in the Hallmarc Constructions entry, fresh from an outing in France in support of the famed Le Mans 24 Hours.

Australian GT will take to circuit six times across the weekend, starting with practice on Friday (July 8) morning ahead of two qualifying sessions on Saturday (July 9).

They will set the grid for the first of three 40-minute races, starting on Saturday afternoon before culminating with two races on Sunday (July 10).

All sessions are set to be broadcast live on Fox Sports, Channel 506, with selected sessions to be shown live and free on Network Ten.