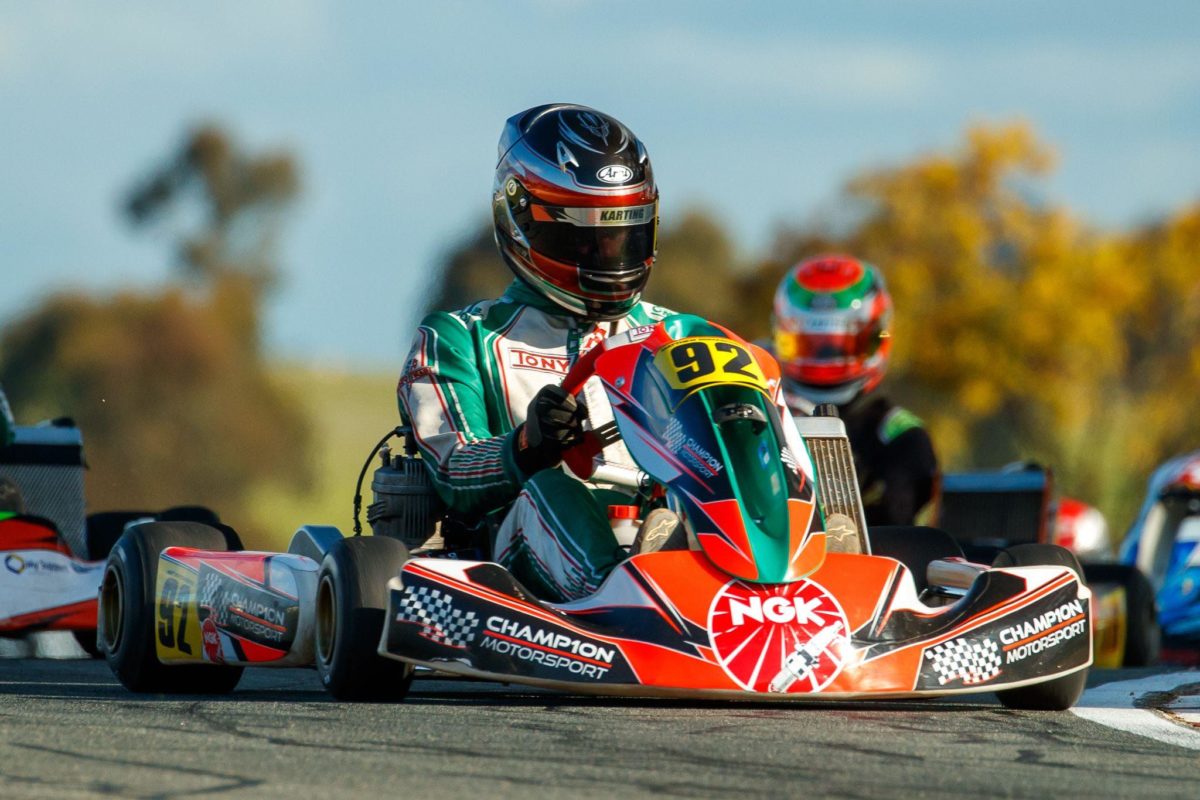 Champion Motorsport took a two-driver team to the most recent round of the Golden Power Series over the weekend.

Gibson was looking to lead both drivers to the front of the field across the two days of racing.

Domaschenz was out the gate first in TAG 125 Light with qualifying.

Matthew was up against a tough field of 20+ drivers and was able to set the 10th fastest time against some of the state’s best.

Domaschenz under Gibson’s guidance, did a superb job in the heats to come home in position 10 in heat 1 and then move up to position 8 in heat 2.

Matthew put in a brilliant final heat to make his way into the top 5 in fifth spot.

Domaschenz looked able to fight in the top 5 in the final but he was pushed off at turn 1, putting him to the rear of the field! Matthew drove his heart out and made his way back up into the top 10 to cross the line in 10th position to finish the weekend.

“I got hit coming out of turn 1 which put me back to almost last.

“I fought my way back through to 10th position.

“Congratulations to Troy, Liam, and Jamie on their podium results.

“I would like to thank my pa, Champion Motorsport, NGK spark plugs and everyone for their help and support.”

Joshua Hee Keng hit the track next in another near 20-kart field in KA3 Senior Light.

With practice being in wet conditions, Hee Keng was going into qualifying with little set-up knowledge.

Joshua was able to do a superb job in qualifying, coming home inside the top 10 in 8th position.

Hee Keng was consistent across his first 2 heats, coming home in position 9 for both before bursting into the top 5 in heat 3 with a brilliant 4th place result.

Joshua had a rough start to the final but kept himself in contention in the top 10.

Hee Keng was able to cross the line just outside the top 5 in position 7 overall and spoke post weekend on his limited preparation and the great result.

“With the weekend starting in the wet, it was tricky to get a good starting setup.

“Struggling with overall pace on Saturday, the pace was getting better through the heats with a position 4.

“After an incident at the start I managed to stay with the leading group.

“It was the best the kart felt all weekend.

“After not racing for a few months, we take away many positives from the weekend.”

Champion Motorsport will have some of its drivers competing back behind the wheel this weekend at the 5th round of the Victorian Country Series at the Hamilton Kart Club.