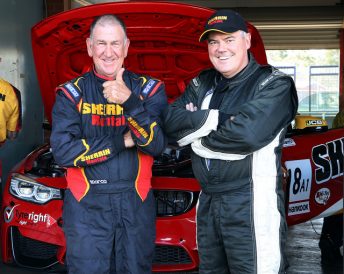 Following his tin-top racing debut with the APC in Sydney last month, accountant Stephen Champion is champing at the bit to get to Queensland Raceway for round four of the 2017 APC season this weekend (August 4-6).

The weekend will host more firsts for the rookie – who will co-drive with Michael Sherrin in the Class B championship winning #19 Sherrin Racing BMW 135i – including his first time at Queensland Raceway and his first ever night race.

The learning curve has been steep since Champion made his debut in the APC at round three with Sherrin Racing – the event marked what was only his second ever race meeting, and his first ever experience in a tin-top car.

“Before the Sydney APC round, I had done plenty of laps around Sydney Motorsport Park in a Radical at practice days and so forth, and I had enjoyed my first ever race meeting in the Radical there the week prior,” Champion explained.

“My first ever APC experience was certainly very enjoyable if also very daunting – it was my first ever time in that kind of race car and I can tell you, it was very different to a Radical!

“It was certainly a dramatic change, but it was one I really enjoyed. I feel that I got more and more comfortable as the weekend went on, and I think the fact I set my fastest lap of the weekend on my last lap of the last race shows that.

“I really enjoyed the racing side of the APC, with plenty of dicing going on especially on Sunday when I felt more at ease, and I am certainly looking forward to more of that this weekend.”

While the Sydney-sider learnt plenty on debut, it is no surprise to hear that Champion is slightly anxious about what lays ahead in Queensland.

“I am very excited but I am also a bit nervous – especially about the night race on Saturday night,” he said.

“I have never done a night race before, but hopefully the Sherrins can give me plenty of tips when I get there and we can have a good crack at it!

“I watched a lap on YouTube from last year and it looks pretty intense!”

Champion’s association with the Sherrins is not limited to the APC. In fact, it is a relationship that spans almost two decades.

“I have worked alongside the Sherrins for nearly 20 years, and when the chance came up to jump in the car as part of their team I leapt at it,” Champion explained.

“It is in the lap of the gods as to whether I will be featuring at future events, but I can tell you for sure that I am always happy to help whenever they need a co-driver!”

The #19 Sherrin Racing BMW135i will be one of a 25-plus field of cars taking part in round four of the 2017 APC at Queensland Raceway across August 4-6, with the event to feature two x 300km races, including the infamous ‘Fight in the Night’ under lights race on Saturday evening. Spectator access on Friday is free, and only $20 for Saturday or #30 for Sunday admission – a weekend pass is also available for $40.00. All of Sunday’s action will be streamed online live and free via thenationals.com.au