Chadwick puts his title on the line

Chadwick puts his title on the line 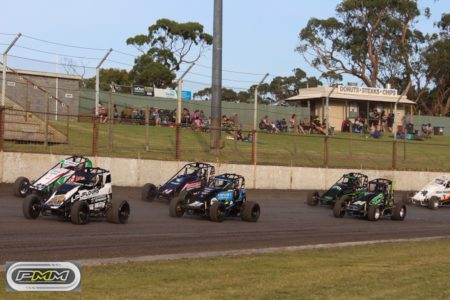 A field of close to 40 drivers will take to the picturesque Borderline Speedway at Mount Gambier this Saturday night (December 11) to decide the 2022 Trident Tyre Centre South Australian Wingless Sprint Champion. Leading the entry list is defending South Australian Joel Chadwick, who claimed his fourth Title in dramatic fashion last season at Murray Bridge with a last corner pass on Joel Heinrich. In addition to his South Australian Title victories Chadwick has also claimed the Australian Championship on two occasions and the New South Wales Title therefore he is very familiar with running the number 1 on the tail tank.

Several other drivers who have claimed National crowns in other divisions will also be in action including former Australian Street Stock Champion Rhys Heinrich and previous AMCA National Champ Ryan Alexander, who has also spent time racing 410ci Sprintcars and Modlites this season.

Going into this Saturday night the red-hot favourite on current form would have to be Jack McCarthy, who has won four feature events already this season, with victories at Murray Bridge (2), Whyalla and Waikerie. Since debuting his ex. Kerry Madsen KPC Chassis he has been outstanding, and he will be a major contender for the A-Main win at Borderline.

Unfortunately, due to Border uncertainty several interstate nominations have been withdrawn but the strong South Australian contingent includes the likes of Mount Gambier’s Mitch Broome and Kirby Hillyer, with Hillyer the only other South Australian feature winner this season after a stunning win at the Murray Bridge season opener. Murray Bridge based Anthony Tapley, Hayden Vickers, Jake Ashworth, Rylan Furler, William Caruso, Bronson Mauro and Brett Ireland so there is a good chance the Title will remain in the home state.

With the nomination list being slightly smaller than anticipated the format for the title has been altered with each driver contesting three rounds of heats prior to the C, B and the 35 lap Championship main event.

For Wingless Sprints of SA