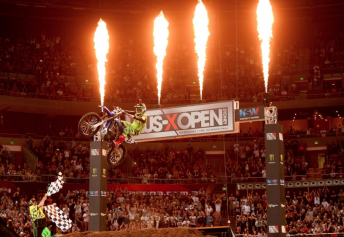 Reed, 33, rode away from the pack with a start to finish victory in the SX1 main event, the Yamaha ace delivering the performance the partisan crowd had come to see in an event which featured an innovative track design with 360 Fly-by passing lane, tunnel section and steel ramp take-off for the finish line jump.

“That feels awesome!” enthused Reed after his triumphant victory.

“I always love coming back home to Australia and racing in front of so many fans, and tonight was great.

“The new AUS-X Open event was a total blast and I’m just so happy to be back on a Yamaha and back atop the podium again in Australia.

“I’ve got to say thanks to everyone who made this ride possible, and in particular thanks to the guys who have made the whole AUS-X Open event happen – this event has been so good so far, and we get to go racing again tomorrow!”

After finishing third at the opening round of the Championship at Bathurst, NSW, in early October, Faith’s series has been dogged with misfortune and cruel luck.

“So to finally get a great start and put together 20 solid laps feels really good, I’m stoked,” said Faith of tonight’s event.

“It‘s been a while coming and I’m just rapt for the Penrite Honda Racing team, who have stuck by me and kept working so hard to achieve the result we all knew was possible.”

Defending SX1 Australian Supercross Champion Matt Moss (Motul Suzuki), who started his night strong with a Heat race win, was totally out of luck in the Final, crashing twice in the opening laps, getting stuck under his bike in the first fall, and then requiring Racesafe medical assistance after the second tumble.

With Moss DNFing and Reardon grabbing a solid swag of points for finishing third, the Yamaha ace now enjoys a whopping 31 point lead in the Championship standings, over his CDR Yamaha team mate Kade Mosig, who finished tonight’s event in seventh place.

“I’ll take the third spot on the podium tonight,” said Reardon, “because that was a tough race as Chad and Gavin both made great starts and got out in front and we all got into a consistent rhythm and just kept knocking off the laps.

“But to come away with a 31 point lead in the Championship, well, I couldn’t ask for much more. That’s a great position to be in with just one more round to go next weekend.

“2015 has been an awesome season for me, and to now be so close to the Supercross Championship feels so good.”

With 35 points up for grabs at the sixth and final round of the 2015 SX1 Australian Supercross Championship presented by Penrite Oils at Knight’s Stadium in Melbourne next weekend (December 5), Reardon need do little more than merely make the Final and finish the race to secure the Championship and complete a stunning comeback to the sport after retiring at the end of 2012.

Meanwhile Reed also emerged on top in a special head-to-head confrontation with American MX legend and the GOAT (Greatest of All Time) Ricky Carmichael, the pair bringing the sell-out crowd to their feet to cheer on two of the true legends of the dirt bike world.

“I got a bad start but I felt like I rode strong all race and once I got in front, I just kept at it and rode clean and smart and brought it home,” said Decotis, who notched up his fourth win in the five rounds of the Championship to date.

“All the team at Penrite Honda Racing have been working so hard to make this possible and I just hope I can wrap up the Championship at the final round in Melbourne next weekend.”

Hunter rode solidly behind Decotis to take a well deserved runner-up finish, helping to make up for the disappointment the Yamaha rider suffered at last weekend’s fourth round at Jimboomba in Queensland, when his race was over barely after it began following a start line crash with Clout.

“The whole night and the whole event has been awesome and I’m rapt to get this result as I came into this ride with the DPH Motorsports Peter Stevens Yamaha team pretty late, so to be up on the podium is a great result for the team, who have put so much support behind me.”

Third place in the SX2 Final eventually fell to Penrite Honda Wilson MX rider Jackson Richardson, who was another to come through from a poor start

“I got a bad start and was a fair way back to begin with,” explained Richardson.

“So to be able to come through and make the podium in third is pretty good overall, I’m happy.”

In provisional SX2 Championship points standings, Decotis now enjoys a 31 point lead over Richardson and with 35 points up for grabs at the final round in Melbourne next weekend, Decotis, like Reardon in SX1, need do little more than qualify for the Final and finish the race  to clinch the Championship.

Alongside tonight’s Supercross racing, an international freestyle MX Best Trick comp was staged at the AUS-X Open, which saw NSW aerial ace Jackon Strong take the win with a stunning one-handed front flip that had the crowd up and cheering and delivered him a perfect 10 from the judges.

The AUS-X Open continues tomorrow (Sunday afternoon) with a second event that repeats the format of today – albeit without Australian Supercross Championship points – with organisers announcing all the action will be broadcast live on the free-to-air Seven Mate network;  see your local guide for broadcast details.