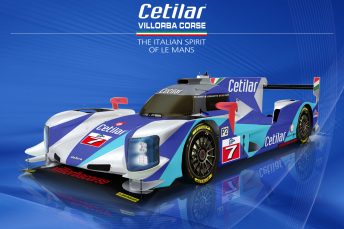 MEDIA RELEASE: Cetilar Villorba Corse will take part in the 24 Hours of Le Mans on June 17-18, 2017. Italian team was allowed to enter the legendary endurance race by ACO Le Mans. This notable achievement completely fulfills the “Road to Le Mans” project that the squad led by Raimondo Amadio has been taking on since 2015 with racing drivers Roberto Lacorte and Giorgio Sernagiotto.

In 2017 the pair is joined by Andrea Belicchi, a very well-known name in endurance racing, where he claims many Le Mans 24 Hours entries. The whole team is delighted for the ACO Le Mans decision and they will enter the #47 Dallara P217 in the LMP2 class. This makes Cetilar Villorba Corse the only Italian team among the two prototype categories admitted to the 85th edition of the 24 Hours of Le Mans. As previously announced, the team will also take part in the 2017 European Le Mans Series.

Team Principal Amadio says; “To be welcomed in the major motorsport temple among the best teams in the world is an unbelievable feeling. It represents a very big step forward in our twenty-year history. A special thought goes to the ‘Road to Le Mans’ project, to Cetilar and to Lacorte and Sernagiotto, who have always believed in such a result from the very beginning”.