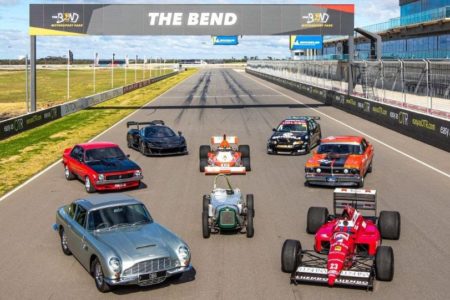 A South Australian obsession with motoring and motorsport that has endured for more than a century will be celebrated when cars from ten decades gather for The Bend Classic this September.

The annual event is set to be the most spectacular motor sport event held in South Australia since March this year, with two days of on-track action set for this September 5-6.

It’s set to make for a stunning Father’s Day weekend at The Bend, with the sprint format – rather than wheel to wheel racing – encouraging rarer and seldom-seen cars out of their garages and onto the circuit.

This year the event celebrates South Australia’s history in the sport, ranging from the 1950s Elfin Prototype that launched the famous local racing car brand, to Formula One machinery that raced on Adelaide’s streets in the 1980s.

More than 60 entries have already been received for the two-day Super Sprint event, which sees cars racing against the clock in more than 10 different categories across the weekend.

“The Bend Classic is a celebration of historic road and race cars, and we’ve got lots of owners keen to dust of their precious classics to get them on track, some of them for the first time this year,” said The Bend Motorsport Park Marketing Manager, Michael Rossi.

“Our focus this year is on South Australia and its incredible history in Australian Motor sport.

“Typically, The Bend classic encourages interstate competitors and last year we had cars from as far away as Western Australia and Queensland. Given the obvious travel restrictions in place this year replicating that has been a challenge, however we have been thrilled with the reaction from local competitors who are bringing some incredible machinery out to The Bend.

“The response has shown that South Australia is the motorsport state – and The Bend is proud to showcase that.”

The event will showcase the broad scope of motorsport and motoring in South Australia with a broad array of vehicles to participate across the weekend.

Confirmed entries already include a 1919 Dodge Speedster that at one hundred years old, will be the oldest car ever to compete on Australia’s newest circuit. At the opposite end of the performance spectrum, at least six Formula 1 cars – all of which raced at the Adelaide Grand Prix – are also among the current entries.

Cars from each decade from the 1910s through to the 2020s will be on track or on show at the event.

The Event will also include some of the latest and greatest Supercars, both on track and on display in The Bend’s Welcome Centre.

“A Lamborghini SuperTrofeo will be on track and the incredible McLaren Senna will be here too,” Rossi said.

“We’ve also got some surprises in store that might be Australia-firsts and we can’t wait for people to see what we have planned, there are vehicles that you just won’t see anywhere else.

“The event will suit people of all ages and especially families. The Bend is a huge venue with open, wide spaces and plenty of room for everyone so it’s going to be a great way to celebrate the Father’s Day weekend and the history of South Aussie motorsport.”

The Bend Classic will be held over two days this September 5-6, with spectator admission free of charge and a full on-track program planned across each day.