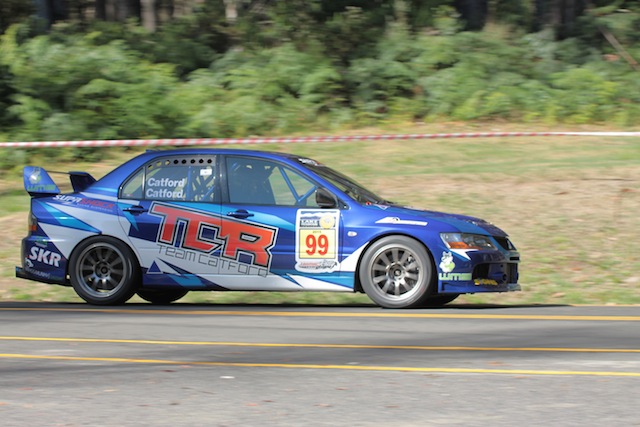 South Australia’s Tristan and Kate Catford have scored their first ever tarmac rally win, coming home ahead of more experienced crews to take victory in the second round of the 2015 Australian Tarmac Rally Championship.

The husband and wife pairing (2006 Mitsubishi Evo IX), from Jamestown, two hours north of Adelaide, finished one and a half minutes ahead of Mackay’s Clinton Arentz and his dual Australian Rally Champion co-driver Dale Moscatt from Sydney in their 2009 Mitsubishi Evo X.

Melbourne’s Craig Dean and Jenny Cole rounded out the podium in their 2013 Ford Mustang Shelby GT500, less than a minute behind Arentz and Moscatt. All three also took victory in their respective classes.

Last year’s title winner, Melbourne’s Danny Traverso (2005 Mitsubishi Evo IX), who was third in the previous round, did not finish this event because of a damaged radiator and intercooler. He had well-credentialed driver, Steve Glenney in the co-driver’s seat, but with Traverso withdrawing at the end of Day One, Glenney hopped in with Tim O’Connor on Day Two to replace the ailing Christina Condon, and helped him cement fourth place outright.

The event in Victoria’s Yarra Ranges National Park was run in perfect conditions over the weekend (March 20-22). The route was made up of 16 closed road special stages, run from Marysville to Cumberland Junction (on the Warburton/Woods Point Road) as well as up and down the access road between Marysville and the summit of Lake Mountain. 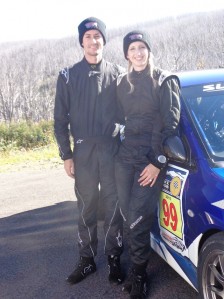 “We are just thrilled,” said an obviously delighted Kate Catford as the couple and their crew celebrated the result.

“The Great Tarmac Rally round of last year’s ATRC last year was the first time we finished an event, after about six or seven years in and out of the sport. We’ve always had the speed and have won plenty of stages, but we’ve not always had the reliability or the consistency. Then we came second at Mt Baw Baw last month.

“We decided on the drive over here that we wanted to aim for top five and we’d be stoked if we got another podium, so this is just fantastic. We loved the roads – they’re very fast and demand 100 per cent commitment but we were able to give that because the crew had given us such a fast, reliable car.”

Clinton Arentz won the previous round at Mt Baw Baw last month but declared himself happy with the weekend, saying the route had enough of every type of road condition to make the event challenging and fun.

“To have another round winner makes the whole series really interesting – and the battle in our class is equally close. It makes the events much more fun when you know you have to work hard to get a good result.

“I’m really pleased for Tristan and Kate – they did a great job – but they will have to stay on their toes for the rest of the year!”

Craig Dean was equally enthusiastic about his result, the big Mustang great on the straights but not nearly as nimble around the tight, twisty mountain roads as his rivals.

“We had a lot of fun. The roads were great, the car was great and the crew was great. I have to say my co-driver Jenny was fantastic. And I did an okay kind of job aside from getting us off the route at one point – I really must get on top of my lefts and rights!”

All three crews are registered for the four events that will make up this year’s ATRC, so their battle will continue at the next round that, due to the winter ski season fast approaching, is not until the weekend of October 3-4 (Great Tarmac Rally).

The 2015 ‘grand final’ (Snowy River Sprint) will be run in the hills above Lakes Entrance in East Gippsland on December 5-6.

All the ATRC events are open to modern (modified), classic (pre-1982) and showroom-spec vehicles which meet tarmac rally specifications (full rollcage etc), with both category and outright awards on offer.

Thirteen ‘rookies’ tried their hand at tarmac rallying in the event’s ‘touring category’, in which would-be competitors can enter their road car and enjoy the safety of the closed roads at a ‘spirited speed’, learning the ropes by following an experienced rally driver around the course.

Further information on this year’s events is available from event director Peter Washington (0418 337 955) or the website: http://www.australiantarmacrally.com/