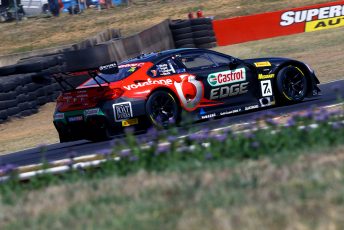 Searing conditions descended on the Mountain today which played havoc with the setups of many runners – more used to the temperate European climates.

This didn’t concern German ace, Glock who pushed the #7 black, red and green BMW into the top 10 in the latter stages of the 20 minute GT3 spec-only qualifying session.

Glock was sixth on track after qualifying fifth.

The beginning of his shootout lap was hampered by debris that was swept onto the racetrack by the previous contender.

It resulted in losing some time in the opening sector.

Monstering the mighty BMW across the top, Glock clawed back more than half the time lost in sector one, however the ask was too much of the two time Formula 1 podium placegetter. He would ultimately end up eighth.

Mostert – who will share with the experienced Max Twigg and youngster Morgan Haber in the Castrol-backed BMW ‘green machine’ ended the Pirelli Shootout in second, with Wittmann qualifying the Richards third.

The Castrol-supported MARC Car Ford that will carry father and son combination – Glenn and Aaron Seton – along with car owner, Mick Benton and Hadrian Morrall will start the race from 33rd on the grid.

Tomorrow’s Bathurst 12 Hour will start in the dark at 5:45am (AEDST) and will proceed to 5:45pm. Live coverage throughout the day will start at 5:30am AEDST (adjust for local timezone) on 7mate or the 7live app (7live.com.au) in Australia; Sky Sports in New Zealand and internationally, streamed via www.bathurst12hour.com.au.

TIMO GLOCK:
“Unfortunately, the car before me went wide in the last corner and put a lot of dirt on the track and that meant it was a bad start for my lap, I had to go through all that dirt and sand and whatever it was.

“I knew already that turn one was going to be difficult, so I was already trying to brake a bit earlier – I turned in, lost the rear and lost like six or seven tenths of a second up the hill.

“I caught up a bit, across the top was not so bad and the rest of the lap was quite ok, not so far off – but if you lose six tenths in the first sector, you’re done, it’s game over at this place.

“We could have been in the top five with a clean first sector but you know, 12 hours tomorrow is a long time – let’s see what we can do!”

TONY LONGHURST:
“To be in the top 10 is a wonderful achievement, we’re all solid, the car is good, the team is good – all we need is a bit of luck now!

“The weather was a bit hot today, so our car gets knocked around a little bit in those conditions – but it doesn’t matter – the BMW M6 GT3 is in immaculate condition and we’re good to go in the morning.”

MARK SKAIFE:
“I think overall it has been an outstanding effort by the team to have both cars (#7 and #60 BMW Team SRM) in the top 10. Timo (Glock) and Marco (Wittmann) have driven exceptionally, so I’m very proud of the way they’ve approached it. Timo unfortunately made a little mistake at turn one in the shootout and it cost him over seven-tenths of a second, he is disappointed, but the overall performance of the car is very good, so it bodes well for tomorrow.

RUSSELL INGALL:
“The goal was to get into the top 10 – anything else was a bonus, so starting eighth is a bonus!

“That gets us out of the mad pack, especially at the start. Remembering that these cars will be starting in the dark tomorrow morning, the further you are up the grid, there are less chance of any hassles in the 10 lap sprint that always happens in these long distance races.

“We’re in the classier end of the field so that’s all we needed to do. It is a hell of a long way, the car is pretty good over a distance. We have been noticing, especially in the heat, there’s been a lot of cars getting very ugly, but the BMW M6 GT3 seems to remain fairly consistent, which is going to be important.

“The muscle flexing, ego phase – being qualifying – is out – now comes the good bit – racing.”