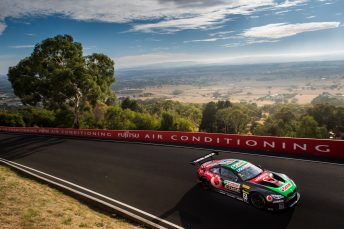 MEDIA RELEASE: The Castrol Vodafone BMW attack on the Bathurst 12 Hour was cut short at the halfway point after an incredibly strong showing from the Masters of the Mountain – Mark Skaife, Russell Ingall, Tony Longhurst and Timo Glock.

The run ended whilst Ingall was attempting to lift the car back onto the lead lap. The bonnet on the #7 BMW M6 GT3 lifted just after the five hour mark. The time taken to re-attach the bonnet saw the Castrol/Vodafone machine drop off the lead lap.

A Safety Car would have brought the super-team back onto the lead lap through pitstops and attaching a green set of Pirelli Tyres, however sadly the Safety Car was triggered by the #7 BMW.

Ingall collected the fence whilst closely chasing another car on the way down the Mountain. Broken steering triggered a collision with the opposite wall and from there, the day was done.

German DTM and former Formula 1 star, Timo Glock, kicked off the campaign in the dark at 5:45am local time and was making good pace before handing over to Skaife.

The six times Bathurst 1000 winner pushed forward after being forced into poor track position as a result of double stacking in the opening pitstop and multiple early race Safety Cars.

He handed over to car owner Tony Longhurst who continued the positive momentum whilst many other teams were focused on individual battles rather than the 12 hour distance.

Russell Ingall got in the car and pushed forward, getting the Castrol/Vodafone BMW M6 GT3 up to third at one stage.

He was tracking well in fourth and was coming towards the end of the stint when the drama started.

It was a premature end to what has been a terrific campaign since first launched in October. The Castrol-backed team has dominated the media focus in the leadup to the event, social media among brands involved in this year’s 12 Hour race and also a huge contingent of corporate guests – over 200 in all throughout the three days of the event.

Whilst Glock and the fans have called for the team to get back together for ‘one more go’ next year, they can walk away with their heads held high after a magnificent effort that captured the imagination of the Australian motorsport public.

RUSSELL INGALL
Talk us through what happened out in the incident?

“I just came up behind another car – we actually had a reasonable pace going – and basically I just tagged the wall on the inside just before the Dipper.

“I was right up behind the other car and lost track of how much real estate I had on the inside. I was trying to line him up for the Elbow, but that is life – just a simple mistake.

“Hitting the inside wall must have broke the steering, which fired it into the outside wall – that was it – lights out.”

How has the whole few months of this program been for you?

“It is a real shame to end like this. Skaifey did a fantastic job, Tony has been great throughout the whole process in putting this whole deal together and Timo has been tremendous. The corporate partners, Castrol, Vodafone, The Boat Works and BMW have been terrific – it is a real disappointment to finish like this – but it is just a typical Bathurst deal – when this place kicks you in the guts, it kicks you pretty good.

“I don’t think I’ve had too many walks back from this place, I think this is one of my first and I can tell you, it doesn’t feel very good.”

TONY LONGHURST
It was a premature end, but what a wonderful program this has been.

“Well, we did our best. The Mountain – it just bites you, it is a mongrel place – it either is successful – or a failure and it just bit us today. We just move on from here.

Can you sum up the program that you’ve put together over the past few months?

“I think we did a remarkable job getting the sponsorship together, getting Russell and Mark together along with Timo. All of us have had a really great time together – it’s been a good adventure and a shame that it ended on a low instead of a high – but no one can say we didn’t have a go.”

A sad end to what was looking very promising

“It was an unfortunate way to finish the 12 Hour. The car was very good. I really feel sorry for Russell, it was just a very slight mistake which is an easy one to make in that part of the track, the car sliding down through the esses and bumping the fence on the inside.

“It could happen to any of us, in fact I’ve done it before myself, so it is just one of those things that happen when you are pressing on. At that stage of the race, we were looking for a Safety Car.

“If we got the Safety Car, we were coming in for four new tyres and to fill up and we would have been back on the lead lap. When you are looking for a Safety Car like that, you just don’t know what’s going to happen and unfortunately, we caused the Safety Car that we were looking for.

Explain the experience of this program for you

“It has been unbelievable – I feel really sorry for Tony and for everyone involved because it’s been a hell of a ride. The guys come up with a plan mid-year and we really enjoyed it. To put it together, we’ve got great corporate partners in Castrol and Vodafone, BMW have been wonderful with us and we were genuinely in contention – we genuinely could have won this race.”

“These things can happen – that track (Mount Panorama) just doesn’t give you much room for little mistakes. You know, 12 hours is a long race and until that moment, we were running pretty much trouble free. The bonnet came loose a bit, we fixed that and then at the end was the contact, but things happen like this.

“It was great to be here with the guys, we showed really good speed and we were just going with the pack and trying to survive. It was running quite well.”

You took on the start this morning in the dark, how was that experience?

“It was a good experience for me. The middle of the first stint when we had the Safety Car was really impressive with the sunrise.

“It (the Safety Car) came just at the right moment to enjoy a bit of the sunrise and it looked awesome – I know now why they call it Skyline and it was just a good experience.”

Tell us about this week with the Masters of The Mountain – first time in Australia, not in an open-wheeler, first time at Bathurst:

“When I heard the first time the line-up I was just really proud to be part of it. These guys have so much passion for their sport and throughout the whole weekend they were so motivated, so into detail and trying to improve and looking at where they can improve and save time in pitstops.

“They were on it all the time and that’s really cool to see. They didn’t just show up to take part, they just wanted to be competitive and to be honest it was just an honour to drive with them over the weekend.

“I’m going to try to convince them to come back next year, if we had the chance again it would be great!”