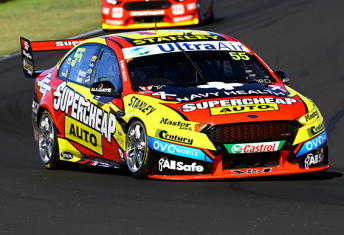 Castrol EDGE’s long-running support of the Virgin Australia Supercars Championship continues with the name synonymous with international motorsport, taking on the naming rights of the Supercars App.

The Supercars App powered by Castrol EDGE, was launched in March of this year ahead of the Adelaide 500, and to date has been opened almost two million times with fans recording over eight million app screen views.

This partnership continues Castrol EDGE’s long-running support of Supercars, which has included various naming rights agreements over the past 21 years.

“We are enormously proud to have Castrol EDGE as the naming rights partner of the Castrol EDGE Supercars App following on from the great success of our partnerships with them in the past.

“Castrol is a global power brand and widely acknowledged as the world’s leading specialist provider of lubricant solutions. Their support will drive help us to continually find ways to improve ways to engage with fans through new technologies.”

Castrol Marketing Director – Ben Rose. Castrol is one of the longest standing supporters of the Supercars sport where it is now part of our DNA. We are constantly working with the Supercar team on how we can make the experience a great one for the motorsport fans. The
introduction of the Castrol EDGE Supercars App brings innovation and technology to the forefront of race entertainment and interaction. It’s like you are in the pits monitoring the race.

“Castrol EDGE has always looked to push the boundaries of technology, so to have Castrol EDGE supporting the best-in-class Supercars App is a natural fit.”

“We’re excited to be able to help fans get even closer to the action and experience Supercars in new and unique ways, wherever they may be.”

The Supercars App powered by Castrol EDGE includes breaking news, videos, imagery, and detailed information on all events, teams and drivers from Supercars.com.

Event attendees are also enjoying being kept up to date with additional information on the app, including interactive precinct maps, track schedules, day planners and event experiences.

Fans who wish to download the Supercars App powered by Castrol EDGE, can also access a unique ‘multi-screen’ experience with live 3D car tracking, extensive timing information and a live Coates Hire Leaderboard which is available for $9.99 for 12 months access.