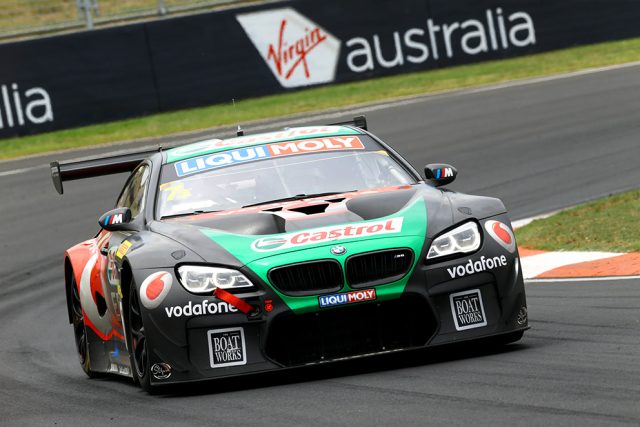 The Castrol-backed ‘Masters of the Mountain’ BMW M6 GT3 ended its first major hitout at Bathurst inside the top 10.

The Castrol Vodafone BMW Masters of the Mountain – Russell Ingall, Mark Skaife, Tony Longhurst and Timo Glock – have ended the opening practice day inside the top 10 of the 59 car field with their BMW M6 GT3.

The day was spent getting Glock up to speed on his first visit to Mount Panorama, however the German ace – who has two F1 podiums to his credit – came to grips with the rise and fall of the 6.213 kilometre circuit in no time.

The track presented a different proposition to the BMW Experience event the Bathurst legends – who have 11 Bathurst 1000 wins between them – participated in back in November. Hot conditions have descended upon the Western New South Wales region for this weekend and are expected to rise on the approach to race day.

Presenting an additional challenge was coming to grips with two compounds of Pirelli Tyres – medium and hard.

Ingall ended the shorter opening session this morning on top, which was for non-Platinum or Gold seeded drivers.

With the full field on track, traffic was the talk of the day. The speed differential between the classes within the Bathurst 12 Hour make-up created some issues in places, however this was to be expected given the difference between the outright GT3 cars (which the Castrol Vodafone backed machine is in) and the smaller class cars.

The #7 team is working on a setup that will be closer to that of the sister car for tomorrow’s fifth practice session. This will then be followed by a frenetic one hour qualifying session and a further 20 minutes for the Class A GT3 cars only.

A top 10 Shootout will round out the day’s activities at 3:30pm Australian Eastern Daylight Savings Time, which will be shown live nationally on 7mate, in New Zealand on Sky Sports and internationally on www.bathurst12hour.com.au.

All non-televised sessions will be livestreamed around the globe (including Australia) on www.bathurst12hour.com.au.

Sunday’s race will begin at 5:45am local time.

“This morning, the car was good, the temperature changed in the track quite a bit throughout the day. It is a lot hotter than when we tested here, so we lost a bit of pace, but think we will get it back alright.

“There are going to be a lot of pace car laps, so I think you’ll have to re-think your strategy to the race. If any team thinks they are just going to run away – I don’t think it is going to happen. Every stint you will probably get a safety car at some stage which will bring the field back together.

Timo has been a great fit to the team, he’s been there and done that. It took him one session to get his head around the track. He definitely appreciates what myself and Skaifey have been telling him about the circuit. It is totally different driving a road car around there and all of a sudden driving at some sort of speed – it has opened his eyes a bit!”

TONY LONGHURST:
“Bathurst hasn’t got any easier, that’s for sure (laughs).

“It’s tough with all of us trying to chase the car and make it easier to drive faster. Sometimes you take a couple of steps backward before you go forward – and with the traffic, its is very, very hard.

“I wasn’t expecting there to be such a speed difference. Perhaps once some of these lads get some more laps under their belt it might be a little bit easier, but the race is absolutely going to be a survival of the fittest or smartest.”

MARK SKAIFE:
“It has been a useful day in terms of getting to grips with the difference between a hard tyre and a medium compound tyre that we have here at the 12 Hour.

“We’ve had a couple of little issues that are a bit of mystery in terms of the overall grip level compared to when we tested here, so it hasn’t been as fast as we’d like but the balance isn’t too bad.

“So at the moment, we’re going to make a couple of little changes ahead of tomorrow and switch it to be more like Steve, Marco and Mark’s car – and we’ll see where that lands us.”

TIMO GLOCK
“It is quite interesting, there is a lot of traffic, every lap nearly. It is difficult to get a read on the track, you know with it being my first time here – it isn’t that easy.

“We need to fine tune the car a little bit and I need to have a better rhythm and get things together. It is good fun, I am enjoying every lap, every metre here at Bathurst, so I’m really looking forward to tomorrow.”