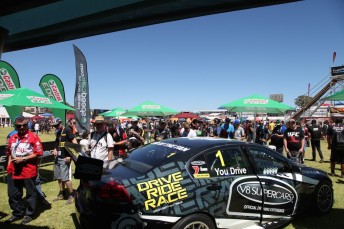 The Castrol Townsville 500 in July is one of two V8 Supercar properties the world’s leading specialist provider of lubricant solutions will place its’ brand with this year.

The Castrol Townsville 500 is supported by the Queensland Government through Tourism and Events Queensland as part of a growing calendar of sporting, cultural and regional events throughout the State.

V8 Supercars CEO James Warburton said the multi-year commitment from Castrol had continued the success of the sport in bringing on new Championship and event partners.

“Castrol is widely acknowledged as the world’s leading specialist provider of lubricant solutions and has enjoyed a rich history within V8 Supercars racing since its’ inception,” Warburton said.

“Castrol has one of the strongest pedigrees in motorsport through leadership in technology and commercial support of teams, drivers and organisations from a raft of motorsport disciplines across decades of involvement.

“As a company entrenched in world motorsport it is a logical step to add Australia’s biggest category, and one of the biggest sports, to its’ brand portfolio.

“To extend the Townsville sponsorship with the Official Oil Partner shows that Castrol is right behind this Championship and the exposure it will bring to the brand.”

General Manager of Castrol Australasia Sean Rahaley is excited by the new partnership which is set to put Castrol EDGE front of mind amongst Australia’s loyal motorsport fan base.

“Castrol has enjoyed a rich history in Australian motor racing and continuing this in an official capacity with one of the greatest touring car championships in the world is an exciting time for our organisation, V8 Supercars and the fans.

“I’m certainly looking forward to seeing an increased presence in the sport on top of our already strong association with the Pepsi Max Crew FPR, Supercheap Auto Racing and Nissan Motorsport outfits.

“Castrol EDGE with Titanium Fluid Strength Technology is our strongest oil and thus we have chosen to partner with one of the largest racing categories in the world.”

The Official Oil designation means Castrol EDGE, the brand’s strongest, most advanced oil, is showcased at each of the circuits across the 2014 Championship.

The Castrol EDGE brand will also present V8 Supercars latest telecast concept, an official kilometre counter during each of the live races across the Seven Network.

Further to this, the sponsorship arrangement will result in the current Teams’ Championship becoming the Castrol EDGE Teams’ Trophy.

Castrol Australia Marketing Director Diana Hall shadowed Rahaley’s thoughts and is excited by the opportunity to link the Castrol EDGE product directly back to the brand’s key demographic.

“Castrol’s DNA has become anchored in motorsport over generations and is the perfect brand fit within the V8 Supercars community,” said Hall.

“We’re always searching for opportunities to continually push the boundaries and what better place than within the V8 Supercar environment’s extreme and punishing conditions for car and driver.”

Castrol has a rich heritage in Australian motorsport and a raft of impressive records including an astonishing 19 Bathurst 1000 wins on Castrol oils.

More recently Castrol celebrated with FPR by winning the 2013 Supercheap Auto Bathurst 1000 which was a maiden win for both the FPR squad and lead driver Mark Winterbottom.