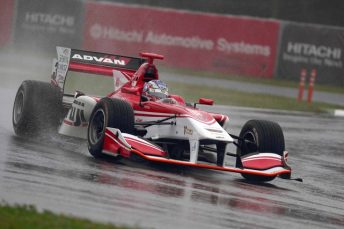 Nick Cassidy’s debut season in Super Formula might have finished with a washout race at Suzuka but the Aucklander is happy with how he performed.

Home for a fortnight, before returning to Japan for the final round of the SUPER GT Championship Cassidy said his first experience of the nearly 600 horsepower Super Formula single seater had gone better than expected.

“We had some highs and lows, but the good bits were above expectations.”

With a podium place at Okayama and then pole position at Sugo, the Kondo Toyota team he drove for had its best season in four years.

“It was the first time they had scored a podium in four years and had a pole position in eight years.”

Despite the ups and downs Cassidy believes it will leave him much better prepared for a return to the series next year. “I was getting used to the car and the team,” he said. “And while the results weren’t always there, we finished every weekend having made progress.”

Cassidy finished tenth in the championship and is already scheduled to start testing for 2018 at the Sepang circuit in Malaysia before Christmas.

“I think the improvement I have shown in Super GT this year compared to my first season in 2016 is a good omen for developing in Super Formula next year.”

Cassidy and his co-driver Ryo Hirakawa will go into the final round of the SUPER GT series in their Lexus LC 500 with a six-point lead over Kazuya Oshima and Andrea Cardarelli. In his first season in the class last year, Cassidy finished fifth.