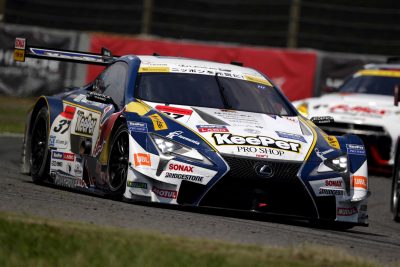 Nick Cassidy is under no illusions how tough the defence of his Super GT Championship will be as he returns to Japan this week to continue preparations with extensive testing of his Lexus LC 500.

“I think it will be a season long development battle,” said Cassidy. “The roles are a bit reversed from last year and we will be playing catch-up.”

Cassidy points to the final round of the series last November when he and team-mate Ryo Hirakawa became the youngest ever combination – they are both aged 23 years – to win the championship, Japan’s equivalent of V8 Supercars.

“Our main rivals qualified faster at the end of last year,” said Cassidy, who completed some testing in Malaysia before Christmas and returned to Japan earlier in the month.

But that session at the Fuji circuit had hardly started and it began to snow, so he returned home. “We didn’t accomplish much in that one hour and the rest of the test was abandoned.”

Cassidy has a positive outlook on the eight-round series which runs between April and November. “I think we are more advanced than at the same time last year.”

Cassidy and Hirakawa have the same engineer and team of mechanics that took them to the title in 2017 in the TOM’S Keeper Lexus LC 500.

They have also been buoyed by winning the Japan Motorsport Press Club Driver of the Year Award for their title winning performance.

“We have a great relationship in the team,” said Cassidy, who is looking forward to six days of testing at the Sepang circuit in Malaysia in February, before another six days at various Japanese tracks during March.

The championship starts at Okayama over the weekend of April 7 and 8.

Cassidy will also be kept busy by the seven round Super Formula single seater championship, which uses the same 600 horsepower engines as Super GT.

Even though he had a podium place and a pole position in 2017 Cassidy expects it will be harder this year.

“It will be difficult to replicate those results. I have the same package as last year, but we haven’t got a lot of new stuff to try on the car. We now have a year’s experience in the Kondo team, but like Super GT there are a lot of good drivers.”

Series regulations limits the team to five days testing before the championship starts at Suzuka in April.