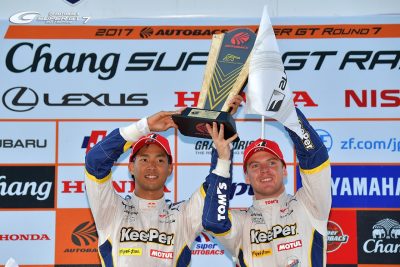 Nick Cassidy, the youngest ever winner of Japan’s equivalent of V8 Supercars, expects a tough time defending the Super GT title in his Lexus LC500 when this year’s championship starts at Okayama this Sunday.

With co-driver Ryo Hirakawa, Aucklander Cassidy will start the championship as the marked men, carrying number one on their 600-horsepower coupe.

The pair along with all their rivals have spent several days testing at Japanese tracks and in Malaysia over the last month to prepare for Japan’s premier motor racing series.

“The times have been extremely close,” said 23-year-old Cassidy “A second has covered the top ten.”

In some sessions Cassidy has been as high as second fastest, while in others he has not made the top ten.

“I think we’ve been improving and getting better,” said Cassidy. “But you are never quite sure if teams are testing a qualifying set up or finding the best compromise for a long run like we use in the races.”

The eight-round series runs until November and has races over various distances between 250 kms and 800 kms.

“Maybe we have the speed to get on the podium at Okayama,” said Cassidy. “But it will be tough and some of the other teams are more favoured.”

Among his rivals will be former Formula One World Champion, Jensen Button; Finn Heikki Kovalainen, a Formula One refugee in another Lexus LC500, who won the series two years ago; four times champion Ronnie Quintarelli and top local drivers Kazuki Nakajima and Kami Kobayashi who both have Formula One experience and drive for Toyota in the World Endurance Sportscar Championship.

Swedish driver Felix Rosenqvist is also expected to be a strong contender. He currently lies second in the international Formula E Series and is a former European Formula 3 Champion and Macau Grand Prix winner.

“We managed to continue developing the car through last year and will look to do the same again.”