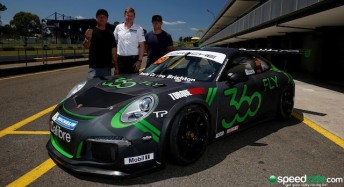 MEDIA RELEASE: Porsche Carrera Cup Australia will partner with leading 360º camera, 360fly, for the 2016 season. 360fly is a unique action camera that records in 360 degrees, providing an interactive virtual reality experience like no other.

As part of the partnership, 360fly will feature branding on the rear wing end plates of every Porsche Carrera Cup car throughout 2016 along with video and digital integration.

In addition to its Carrera Cup partnership, 360fly will be the major partner of Fraser Ross’s 2016 Carrera Cup entry for his second season in the championship.

Porsche Cars Australia Motorsport Manager, Kurt Sakzewski, says the new partnership will allow the championship to share the thrilling experience of being inside a Porsche 911 GT3 Cup car with a wider audience.

“Motorsport is exciting and fast paced, though it’s rare to experience it from within the race car. For us, 360fly can provide the closest alternative to being inside a 460hp 911 GT3 Cup car with its innovative 360º camera. “360fly is a tremendous product and is paving the way for a new kind of virtual experience. We’re pleased to partner with this new product and provide the thrilling virtual reality experience previously only experienced by our Porsche Carrera Cup racers.”

“We’ve had great interest in the 360fly product since it launched in Australia, in which time we have shared our 360fly experience – an inspiring, uncropped way to view the world – with a vast new audience. With this new partnership, we look forward to sharing this experience with Carrera Cup’s drivers and teams and the wider motorsport community,” said Haynes.

“With the addition of Porsche Carrera Cup Australia and Fraser Ross to our growing partnership portfolio, which also includes V8 Supercar driver Jamie Whincup and Motocross superstar Chad Reed, we are in partnership with some of the greatest motorsport properties and athletes in Australia.

“Our partnership with Carrera Cup will share the 360fly experience with a wider audience while aligning the product with one of the greatest motor racing championships in the region.”