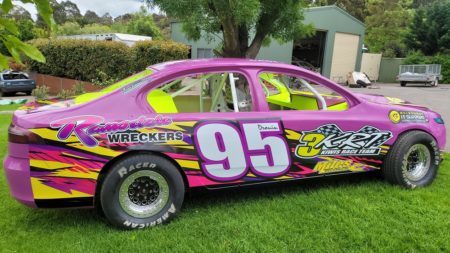 Narre Warren youngster Hunter Carey is excited to get back on track for Speedway season with the St Joseph Boys School student and his father recently completing a build of a new Ford Falcon FGX race car for Hunter to compete with this season at speedways around Victoria.

Carey who has raced in Victorian Speedway Council Standard Saloon Juniors and Junior Open Sedans has a new Speedway Sedans Australia spec Modified Sedan which for now he will register to compete as a Junior Open Sedan.

At just thirteen years of age and whilst he is one of many youngsters racing each weekend, it is still unique to most people at school and around his hometown and friends and family for many reasons, that he is a race car driver.

His love for motorsport is a result of his father being a keen New Zealand Stock Car fan before relocating to Australia many years ago, Carey caught the bug just like dad and they decided to go out and have some fun behind the wheel.

This season as well as getting back to tracks they have already competed at, they hope to get to Mount Beauty, Nagambie, Rushworth, and other tracks that run the Junior classes they compete in.

With the new car, Carey will need to get used to it first however long that takes and eventually try to compete closely with adult lap times down the line.

Carey has dreams to compete in one of many national level categories in Australia and is still working on the decision, it is likely he may first move into Modified Sedans once he is of the required age and head up to Queensland to places like Kingaroy and Gympie to compete, however another class of interest is the Mod Lites although the class currently does not have a foothold in Victoria with racing in South Australia and Mildura.

“My mates and school colleagues think that what I do is a bit different,” Carey shared.

“Most of them are into Football, Cricket, or Basketball whilst I am out flinging dirt.

“They are amazed I can actually drive a race car also, some people I know still have not had the opportunity to start their learners.

“I get a lot of questions from people when they find out what I do.”