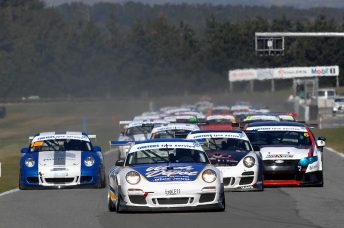 Saturday September 9th will see a massive field journey South to Teretonga Park, Invercargill for the opening round of the three round Carters Tyres One Hour Race Series. Run alongside the Carters Tyres South Island Endurance Series, the 2017 Series is also again a qualifying series for the New Zealand One Hour Endurance Championship to be held in March 2018.

The One hour Series is again a real mixed bag of entries with a high number of new cars for 2017. This, along with seasoned campaigners making modifications & upgrades, means that Series organizers can promise that fans will again witness some outstanding racing. Entries are wildly varied and range from near new Porsche & other exotic race cars, through to little Toyota’s & Honda’s that are more commonly seen at the local supermarkets. So no matter if you’re a fan of V8’s, turbo’s, rotaries, big, small, Japanese or European cars you will definitely be able to cheer on a favourite! The Series has reserve lists, that vary between 2 and 8 cars for all its One Hour rounds so this will account for some usual attrition as the series progresses, yet mean that fans should see capacity grids at all 3 rounds.

The glamorous Class E (GT spec cars) is likely to be where both the race and outright series battle will be. The pre-series favourite will be current New Zealand 1hr Endurance Champion Jarrod Owens in his new Porsche 997 Cup S, although has had some teething problems with this new car. Another who has suffered a setback in the lead up to the Series is the beautiful Porsche 991 of Russell McKenzie who will be working against the clock after a crash in recent testing. Others to look out for will include Porsches for Steve Parker (997 Cup S), Allan Dippie/Scott O’Donnell (997 Cup S) Chris Small/Johnny Small (997 GT3) and series rookies Ben Byers (997 GT3) and Jonas Patterson (997 GT3) as well as a near new Porsche Cayman GT4 for experienced peddler Grant Aitken. However never discount the V8 brigade, including the thumping Falcon V8 Supercar of Shane Hodgson who will carry the Carters Tyre Service colours, the return on the awesome MRX Holden Cruise V8 of John Wadsworth and the Ginetta G50 of Milne Horne and waiting in the wings is the twin turbo V8 McLaren 650S of Tony Quinn, who sits near the top of the reserve list.

It is likely that the incredibly fast Toyota AE86 V8 of Dunedin’s Chris Henderson will again be the one to beat in Class C (3501cc+) however in a class where reliability is paramount he will receive some stiff competition from the Corvette C6R of Bruce Davidson and series rookie Boyd Wilson who teams up with young gun Jordan Michaels in a V8 Ford Falcon. However with reliability a key factor also watch out for father & son team Garry and Ben Derrick in their older Porsche 996 GT3 who could easily take class honors through reliability if not outright speed. This class sees the classic V8 v. Turbo battle and for the turbo brigade the Nissan Godzilla is well represented with double OSCA champion Murray Beeby, endurance regular Johnny Waldron & series newcomer Adam Cullen all competing in R32 GTr’s.

The competition will be as fiercely fought throughout every class in the Series and Class B (2001cc-3500cc) is no different. Class speedsters are likely to include the current New Zealand and defending South Island champion Andrew Wrights BMW E36 M3 and a similar car for Adam Glass as well as Warren Good’s ex Ravaglia BMW E30 M3. Andy Giles returns to the Series with his Toyota AE86 turbo and other turbo cars include the Seat Leon of Neville Stowell and 2k Cup graduate Craig Elstob’s similar VW Golf Cup car while the rotary brigade is represented by Marcus Mulcahy & Mal Walters.

After the opening round, the Carters Tyres One Hour Race Series then heads to Mike Pero Ruapuna, Christchurch on September 30th before the grand finale at Levels Raceway, Timaru on 14th October. The Carters Tyres One Hour Race Series is seen as a fun and affordable way to enter endurance racing but still experience the thrill & strategy of the old fashioned tortoise and the hare battles that endurance racing is renowned for. Although there is currently a reserve list for the one hour races entries are still being accepted for the three hour races.

Thanks to Series partner Carters Tyres Service as well as class supporter Allied 24/7/Fuel the Series will again have a significant prizemoney pool that will be paid out across all classes, as well as major spot prizes that can be won by either 1hr or 3hr competitors.

Both qualifying and the race are on Saturday 9th September, with the 1hr race expected to start around 11:30am, followed by the 3hr race.