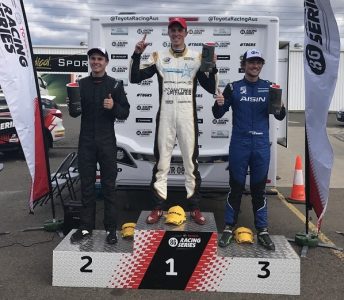 20-year-old Canberra racer Cameron Hill is urging everyone in the nation’s capital city to get behind the next stage of his flourishing motor racing career, and is giving members of the public the chance to become part of his journey through an exclusive micro-sponsor program.

Hill has been the form driver in the 2017 Toyota 86 Racing Series, qualifying fastest in all three rounds of the series and winning the last five races in a row.

With his outstanding results in the 86 Series preceded by his domination of the Australian Formula Ford Championship in 2015, Hill has proven himself as the most exciting circuit racing talent to come out of the Canberra region since Mark Webber.

Hill’s career goal is to compete in the Virgin Australia Supercars Championship. He and his family team are currently piecing together his 2018 racing campaign. Options for next season include Porsche Carrera Cup, Porsche GT3 Cup Challenge, Dunlop Super2 Series and Kumho V8 Touring Car Series – categories that are widely recognised as a pathway to Supercars – but they require significant initial investment.

“Formula Ford and the Toyota 86 Series have both been good stepping stones, and now I’m ready for the next rung on the motorsport ladder,” Hill said.

“The Canberra community has shown a willingness to get behind high achievers from the ACT, so I’m confident of securing the support I need to progress to the next level.”

With the Cameron Hill Racing micro-sponsor program, interested parties can become involved in Cameron’s career with an investment of as little as $100, and exclusive benefits are part of the package.

“We have a couple of levels of micro-sponsorship available, and benefits include discounted meals at Hog’s Breath Café Woden, entry into a draw to win tickets to the final Toyota 86 Series round at Newcastle, and a hot lap in my Toyota 86 race car,” Hill said.

“You also get to have your name displayed on my car.”

“I understand small businesses may not be able to contribute financially, but by offering incentives to micro-sponsors, they can still help out.

Hill will next be on track for Round 4 of the Toyota 86 Series supporting the Supercheap Auto Bathurst 1000, 5-8 October.