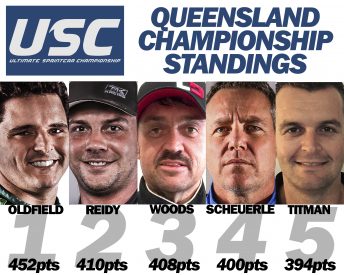 MEDIA RELEASE: Gold Coast gun Luke Oldfield still holds the lead in the Queensland Ultimate Sprintcar Championship that he acquired in November, and with the December and January USC rounds abandoned, the Highland Park racer only to hold on to the lead for three more rounds to secure the title.

Series contenders have just three more rounds to battle for the top five championship spots that carry a total prize pool of $12,000, with Oldfield a clear leader on 452 points, 42 ahead of Danny Reidy on 410, and Allan Woods just 2 points back on 408. Andrew Scheuerle currently sits on fourth on 400 and Kevin Titman on 394 rounding out the top five.

Peter Lack, Brent Kratzmann, Andrew Wright, Rob Hamilton and Dave Whell are in the top ten, while Robbie Farr and Bryan Mann are scattered through the remainder of the top 20 as a result of missing a round earlier in the season.

However, with the “drop-a-round” rule introduced for this year, Farr and Mann will have to figure prominently in the remaining three rounds to have a chance at the series championship, placing even more pressure on this Saturday’s Kratzmann Caravans Firecracker 50 event.

Oldfield was guarded on his thoughts of retaining the lead, siting the “drop-a-round rule” as the great leveller in the competition.

“I’ve had a good run but 40 points isn’t enough to make me sit back and relax, and Robbie and Bryan could easily pop back up in the standings after this weekend. The reality is, that with the ability to drop your lowest scoring round, we may not really know who is going to win this championship until the chequered flag drops on the final feature race on Good Friday!”

The next episode of the series will play out at Toowoomba’s Hi-Tec Oils Speedway this Saturday with action from 5:30 and Ultimate Sprintcars from sundown. Tickets at the gate from 3pm or online now at speedwaytickets.com.au