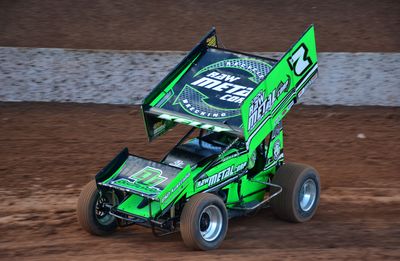 Less than a week after their epic duel in the Queensland Championship feature race in Toowoomba, Lachlan McHugh and Aaron Kelly will face off again this Saturday night (May 1) at Archerfield Speedway when they contest round eleven of the East Coast Logistics Sprintcar Championship. Kelly, who is the current ECL series champion, looked on track to secure his first Queensland Title in Toowoomba until a late-race pass propelled McHugh to a third consecutive championship success. Of course, adding extra spice to the contest is the fact that McHugh is also looking somewhat certain to dethrone Kelly as the Archerfield track titleholder with only four rounds or racing remaining. As always a huge support program will ensure a non-stop night of motorsport entertainment, with Monster Trucks making their return, along with fireworks and the Queensland Formula 500 Championship, plus AMCA Nationals, Lightning Sprints and Formula 500 Juniors.

Although yet to visit victory lane, Kelly has certainly been tenacious in his track championship defence and he currently sits equal second overall in the series standings. However, with wins in seven of the ten completed rounds, McHugh is more than 130 points clear and it would take a catastrophic change in fortunes for him to be beaten. Kelly, on the other hand, finds himself under plenty of pressure to maintain his position from the likes of Callum Walker and Luke Oldfield. As one of only four drivers to have scored an ECL feature race win this season, Walker brings some strong form into the contest, with a third-place result at the previous round elevating him into equal second in the championship points. Forced to miss the previous round when wet weather forced the transfer of the event to Sunday afternoon, Oldfield has dropped to fourth in the standings and will be seeking maximum return for his efforts in a bid to make up the ground lost in his championship chase.

Cody Maroske, meanwhile, is the only other driver in the field with an ECL round win this season and, given his presence on the podium at the last track championship round and again on Sunday night at Toowoomba, he also heads into this weekend in strong form and with a mission to join McHugh as the only driver to score multiple feature race wins. Add the likes of Ryan McNamara, Adam Butler, Kevin Titman and a seemingly rejuvenated Brent Kratzmann into the mix and the scene is set for another sizzling showcase of Sprintcar racing.

With the emergence of new drivers continuing to swell the local Sprintcar ranks, round six of the Petzyo Sprintcar Development Series has attracted the biggest field thus far, with 12 drivers set to lock horns on Saturday night. In his first season of transition from the Wingless Sprint ranks, Brant Chandler has proven to be the standout performer in previous rounds. The likes of Jason King and Nicholas O’Keefe have certainly shown glimpses of speed but have lacked the level of consistency that has thus far carried Chandler to such a strong rookie campaign.

It is not at all surprising that a state title showdown would attract the biggest field of Formula 500s for the season, with 26 drivers nominated for the championship challenge. Competitors are trekking from south of the border and as far north as Cairns to take on a very strong local contingent led by four-time national champion Liam Williams. Although, by his standards, Williams was off the pace at his last outing, he remains the benchmark performer in the category whose presence at the front of the field is seemingly inevitable. For the rest of the field, concocting the correct formula to beat Williams will be the key determining the level of success they enjoy in the championship feature race.

Defending champion Kaydon Iverson is travelling from Townsville chasing back-to-back trophies, with Brodie Davis, Nathan Mills, John Magro and Brodie Boss also representing the north of the state, while other regional racers in the field include Adrian Josefski, Ryan Potts, Joel Josefski and Josh Pokarier. On recent form, James Kennedy, Kurt Wilson and Ryan Newton should certainly feature somewhere near the front of the field, while New South Wales champion Lachlan Caunt is on a solo mission to steal the trophy over the border.

The introduction of the Junior Formula 500 class has been such a success that there are no less than five recent graduates from the category taking part in the state championship, with another contesting the Sprintcar events. The current batch of junior stars will hit the track on Saturday night, all determined to make their own mark.

After dominating the heats once again, it was only a grid inversion that prevented Bruce Marshall from collecting another feature race win in the previous round of the Shock Absorber Therapy AMCA Nationals Track Championship. Despite starting from the back of the pack, Marshall finished in second spot behind Matt Hardy, who had struggled to match the pace of Marshall and Steve Potts in the earlier rounds. Whilst Marshall and Potts have been the standouts with five feature wins between them, Hardy has enjoyed a very successful couple of weeks, winning the Victorian Championship and following that with a feature race win in Toowoomba last weekend. Thomas Vickery has certainly been on the pace of late as well, while it will only take an overdue change of luck for Steve Price to find himself back in more familiar surroundings near the front of the field.

Tyler Stralow is chasing his third feature race win for the season in Lightning Sprint competition, with both Darren Baldwin and Michael Gollagher looking to also add to their win tally with a second visit to victory lane. Proving very quick upon his return to the category at their last outing, Scott Genrich looms as a real threat, while Jim Kennedy will simply be hoping to secure a solid result that might help erase the nightmare of his previous outing.

Gates open at 1.00pm for competitors and online ticket holders only, with general admission ticket sales and entry from 3.00pm. Early racing will hit the track from 5.00pm and the main program will get underway from 6.00pm. There is no reserved seating for this event, however all patrons must maintain 1.5m social distancing.