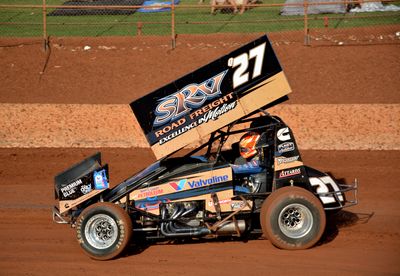 More than 140 competitor entries have been received for this Saturday night (February 13) at Archerfield Speedway, with round eight of the East Coast Logistics Sprintcar Track Championship and round seven of the TFH Midget Series to be decided, along with Wingless Sprints, Modlites, Microsprints, Lightning Sprints and Formula 500 Juniors. Fresh from a dominant display in the previous ECL series round last Saturday night, Tasmanian young gun Jock Goodyer returns to take on another crack field of local and interstate competitors, while Midget action will see former Australian titleholder Kaidon Brown travelling north from Sydney to challenge five-time New Zealand champ Michael Kendall.

Also on the program are big fields of Wingless Sprints and Modlites, who will be contesting the opening round of their Dondex Sheds/Redcliffe Wrecking Extreme Series, along with Lightning Sprints, Microsprints and Formula 500 Juniors.

Last weekend, Goodyer was in a class of his own and never looked likely to lose the 30-lap feature race after qualifying on pole position, becoming only the fourth driver to score a feature race win at Archerfield so far this season. In fact, from five starts in Brisbane this season, Goodyer is yet to finish outside the top five and, having landed on the podium in his previous two starts, his success certainly came as no surprise. Series combatants Lachlan McHugh and Luke Oldfield were again expected to be the biggest obstacle for anybody with victory aspirations, however, rather than set their sights on chasing down Goodyer, the two Gold Coast-based drivers opted to engage in some argy-bargy early in the race that left Oldfield upside down and would see McHugh relegated to the rear of the field, handing a runner-up result to Cody Maroske in his first outing aboard the SRV Transport #27. Another young charger in Randy Morgan delivered his best performance of the season to finish third and all five drivers are amongst the entries again this weekend which, in the wake of what transpired last Saturday, might prove to be the most intensely competitive night of the season to date.

Certainly the form of several drivers last weekend was the best we have seen so far this season and suggests that they might on the brink of a breakthrough result. Kristy Bonsey upstaged a throng of highfalutin big budget teams to earn her place in the Pole Shootout, while both Allan Woods and Dylan Menz served up their best performances of the season to finish inside the top five in the feature race. Current ECL series champion Aaron Kelly was solid again in finishing sixth and continues his steady points accumulation, although a feature race win would certainly give his championship defence a significant boost. Add the likes of Callum Walker, Brent Kratzmann, Dave Fanning, Adam Butler and a returning Mitchell Gee into the mix and the possible permutations are plentiful. Walker won round six of the ECL Championship in fine style and Gee is a former state champ with three top-five results this season from a limited campaign, while Kratzmann, Fanning and Butler have shown glimpses of form that, with a little consistency and a pinch of good luck, might just propel them onto the podium.

Whilst the clash between Kaiden Brown and Michael Kendall in round seven of the TFH Midget Series is obviously a tantalising prospect that promises to deliver some intense competition, there are myriad potential spoilers in the 25-car field, including teenage tyro Bodie Smith and track championship rivals of several seasons running in Darren Vine and Rusty Whittaker. So far this season, Smith has accrued two feature race wins, with Vine, Whittaker and Brad Dawson having snared one apiece. Having made a late start to his campaign aboard the Ian Boettcher Race Parts #35, Kendall is yet to visit victory lane at Archerfield this season, heading infield while enjoying a comfortable lead in his only appearance. However, he comes fresh from a last-start success in Toowoomba and will no doubt relish the opportunity to take on an even bigger field of challengers.

Despite a series of setbacks that have hampered his qualifying performances, Charlie Brown has still managed to finish inside the top five on two occasions at Archerfield this season and, at Toowoomba two weekends ago, he proved the biggest threat to Kendall, chasing the Kiwi expat to the chequer to secure his best result for the season in a result that served as a reminder of his credentials. Others likely to feature in the thick of the action include Chris Singleton, Cal Whatmore, Lachlan Paulger and Nathan Mathers, all of whom have featured on the podium in a TFH Series round this season.

As we have now come to expect anytime the Wingless Sprints appear, a big field has been secured and once again the locals will face-off against a select squadron of speedsters from over the border. Interestingly, Lachlan Robertson is the only driver in the 26-car field who has recorded a feature race win at Archerfield this season, although Ryan Harris arrives fresh from success in Bundaberg last weekend. Having finished inside the top five in every event, including two podium results, Paul Robinson must be closing in on a win, while Liam Atkinson is another who has been consistently in contention without yet achieving the ultimate outcome. A welcome addition to the field and the man who might just emerge as the biggest threat from the NSW contingent is Dubbo-based veteran Mark Blyton, although Jamie Usher has also proven himself a threat whenever he visits Brisbane.

A 20+ field of Modlites will battle in round one of the Dondex Sheds/Redcliffe Wrecking Extreme Series and whilst Klinton HAncey and Terry Leerentveld are the obvious favourites, a win last time out from Sam Gollschewsky puts him very much in the mix to again upstage the two drivers who remain the category benchmark despite the growing popularity of the category. Should this trio strike trouble though, look for the likes of Sean Rose, Dylan Hunter, Kyle Honour and Chris Fing to take maximum advantage.

In Lightning Sprint action, Tyler Stralow will be chasing his third feature race win for the season, taking on state titleholder Jason Rae, former national champ Kurt Wilson and another 10 drivers in round ten of the Stockmans Civil and Plant Club Championship.

Gates open at 2.00pm for competitors and online ticket holders only, with general admission ticket sales and entry from 3.30pm. Early racing will hit the track from 5.00pm and the main program, which will also feature round eight of the Queensland Microsprint Club Championship and the biggest ever field of Formula 500 Juniors, will get underway from 6.00pm. There is no reserved seating for this event, however all patrons must maintain 1.5m social distancing.