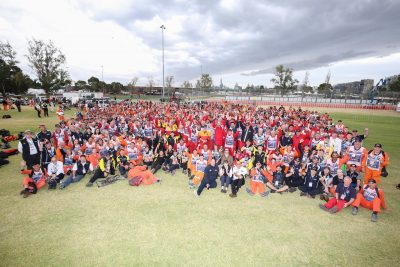 The Confederation of Australian Motor Sport has marked another significant milestone in 2018, with the 10,000th official registered.

It is yet another positive sign for motor sport in Australia, with the growing support from such a large number of officials who dedicate so much of their time to ensure the sport is able to run smoothly.

From popular events like the Formula 1 Australian Grand Prix, Kennards Hire Rally Australia and Supercars to local and club level grassroots events around Australia, officials have been the backbone motor sport for many years.

CAMS CEO Eugene Arocca was thrilled with the milestone, putting the achievement down to the passionate individuals.

“We are really proud of this milestone because officials are such a vital part of motor sport – they are integral to the safe running of the sport and nobody would be racing without them,” Arocca said.

“Not only is it the big international and nationals events where they are important, but in the local and state events as well.

“There are thousands of grassroots events throughout Australia where being an official can be rewarding and give you a chance to see some of the best motor sport talent on show.

“We hope to continue to build our total and continue providing motor sport events in Australia with best officials in the world.”

Joining up in the latter half of 2018, 38-year-old Vanessa Neilson was officially recognised as the 10,000th CAMS official.

Born in Tasmania, Neilson spent her younger years as a big motor sport fan, before losing touch with the industry following a full-time appointment into nursing.

A move up north to Darwin with her family was cut short when the family chose to live in Melbourne, where she was introduced into the world of officiating and designated to the medical team for her first event.

“It feels really good to be the 10,000th official, I grew up watching motor sport and but never got a chance to actually do it,” Neilson said.

“I never thought I would do anything like this ever and I didn’t even realise you could do it.

“It wasn’t until I was pointed in the right direction that I realised it was available. I would have been doing it years had I known earlier.

“It’s a lot of fun, there are a lot of great people and everyone just seems to be amazing.”

With education courses, support groups and plenty of events requiring volunteers, Neilson is just one example of the impact officiating can have on an individual.

Neilson isn’t the only volunteer to enjoy the experience of being an official, as thousands of volunteers dedicate many hours and hard work to put on event all for the love of the game and the ‘best seat in the house’.