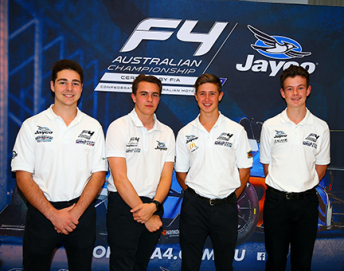 The CAMS Foundation Rising Stars, after enduring six races at Sandown last month, will regroup this weekend for Round Three of the 2017 CAMS Jayco Australian Formula 4 Championship.

Australian Formula 4 will visit Western Australia’s Barbagallo Raceway for the first time in the Championship’s history. The four Rising Stars of Cameron Shields, Ryan Suhle, Simon Fallon and Zane Morse will also make their first appearance in a Formula 4 car at Barbagallo.

Last month, it was a strong debut for karting graduate Ryan Suhle of Zagame Autosport in the championship opening two rounds at Sandown. Placed fourth overall in Round One, the Queenslander was awarded the Burson Auto Parts Rookie of the Round.

“We’re making leaps and bounds every time I’m in the car, whether through driving or car setup improvements,” Suhle said.

“Having driven around Barbagallo Raceway previously, and another Formula 4 test day after Sandown, I’m feeling confident.”

Suhle is the best placed Rising Star in third position overall, with Cameron Shields not far behind in fourth.

“I’m super happy to be the top Rising Star going into round three, especially considering the talent of the other boys in the Rising Star program,” Suhle continued.

Shields, who recovered well in Round Two with impressive overtaking manoeuvres in the rain at Sandown, has the best overall result of the Rising Stars – with a third place finish in Round Two.

“After two DNFs in the first round and a compromised qualifying due to technical difficulties the car faced, it was a long climb to get to the top,” Shields said.

“For the remainder of the weekend, I had to keep constantly fighting my way through from the rear to finish on the podium, which I achieved in Round Two with a standout Race Two starting from 12th and finishing 2nd.”

Shields is excited to sample Formula 4 machinery at Barbagallo for the first time, and has stated he is well prepared heading into Round Three.

“I have been constantly training to maintain my fitness levels and watching various videos from previous races. As it is a track I have never been to before, it is hard to prepare and can only know where I stand once the flag has dropped at the completion of qualifying,” Shields said.

“It is a very a short track and appears to have limited corners, so with the grip levels the Formula 4 produces it will bring some incredibly close racing which I am looking forward to.”

“I must say a big thank you to the crew at Team BRM for turning around a solid car by the end of the weekend at Sandown, and especially my supporters Mark and Heidi Ward of McDonald’s Toowoomba for their constant support.”

For 2016 Burson Auto Parts Rookie of the Year Simon Fallon, the Victorian is eager to claw back critical championship points after a difficult opening weekend at Sandown.

“The part I’m most looking forward to would definitely be the challenge of learning the track, since we have never been there. I’m super excited to get out there and give it all we have,” Fallon said.

“Although Sandown was a shocking round for us, we still learnt about how important it is to keep pushing even when things aren’t going our way and to salvage as much points as we can.”

“Over the break, we have been keeping our eye in with some karting so that I’m race fit and can perform at my best as soon as we hit the track at Barbagallo.”

Zane Morse and his Team BRM teammate Fallon are tied on 17 points apiece, with the duo 11th and 12th in the championship standings respectively.

“After Sandown, I have amped up my physical and mental training. I cannot wait for this round to give it my best shot,” Morse said.

Morse, who displayed encouraging pace on his Formula 4 debut at Sandown, is eager to capitalise on Australian Formula 4’s first ever visit to Barbagallo with no previous testing data for teams to rely on.

“I’m definitely looking forward to Barbagallo, as I’ve never been on the track. I have been looking at some videos for some tips, so hopefully that will speed up our preparations,” Morse continued.

“I had a bit of bad luck at the last round in Sandown with two mechanical issues, which cost me two heats and a heap of points. On the final day I was fighting for a podium, but a front lock up cost us there. In another race I was in the top four before aquaplaning over a puddle that I didn’t see.”

The CAMS Jayco Australian Formula 4 Championship will explore its first laps around Barbagallo on Friday morning with two practice sessions to be held at 9:00am and 11:25am AWST.

The drivers will then qualify for pole position at 2:00pm Friday, with the fastest driver to be awarded with a $500 Virgin Australian flight credit prize.

Three races will be held across Saturday and Sunday, with sessions to be broadcast live on Fox Sports 5 (506) and on Foxtel Play.