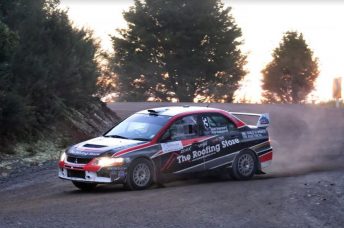 Tauranga’s Phil Campbell has ended a run of more than a year struggling for results with a close fought runner up spot at the Far North Rally, run out of Paihia over the weekend.

After finding a centre differential issue that plagued the team across the 2016 season over the off season, an early mechanical failure put him out of his only appearance to date in 2017.

Campbell teamed up with co-driver Matt Hayward for the first time but the pair were immediately on the pace and set the third fastest time on the opening stage.

A heavy coating of gravel hampered Campbell, who was running third car on the road, through the second special stage however he was able to record the fifth fastest time, dropping him to fifth. With the third stage being cancelled and a third fastest time through stage four, Campbell would start the afternoon’s loop of three stages in fourth place and well in the hunt for a podium finish.

The afternoon saw Campbell mount a charge and he immediately topped the time sheets through stage five, then dominated stage six with a time 16 seconds faster than any of the chasing pack to move into second place.

That left a gap of just over 11 seconds heading to the final stage and with new tyres bolted on, an all-out attack was on the cards. Campbell flew through the stage to take a third consecutive stage win, but was only able to reduce the margin to 9.6 seconds, leaving him to take the runner up spot.

“It was great for us to have a clean run and be back on the pace, it does a heap for the confidence so I’m looking forward to Coromandel now,” said Campbell. “That last stage was awesome, we were absolutely tapped, that’s why we go rallying.”