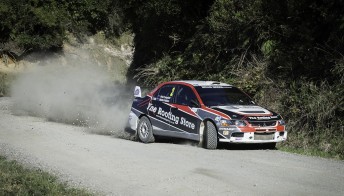 Tauranga’s Phil Campbell heads to the latest round of the Brian Green Property Group New Zealand Rally Championship driven by VINZ, the VINZ Goldrush Rally of Coromandel, confident of recording a good result.

Campbell and co-driver Venita Fabbro have ridden a rollercoaster of results since making their debut in The Roofing Store Mitsubishi Evo 9 at the start of the year, but a rear diff failure at Wairarapa became a blessing in disguise, with a new rear diff transforming the car.

After setting some top stage times after the diff failure at Wairarapa, Campbell went on to take his maiden rally victory on home soil at the recent Tauranga Clubmans Rally and claims that the car’s handling has been transformed.

That combined with a completely new event in a region that hasn’t seen rallying for some 35 years means that Campbell’s relative lack of experience compared to his opposition will not be such a disadvantage, while some of the tighter sections of the event will suit Campbell’s lesser powered Group N Mitsubishi.

“I’m really confident that we can deliver a top result, the car is just a joy to drive with the new rear diff in it and with a rally win under my belt, I can’t wait to get back behind the wheel,” says Campbell.

“A new event is always a good challenge too and makes for a level playing field with no-one having done the roads before.”

The VINZ Goldrush Rally Coromandel gets underway with a ceremonial start in Whitianga from 4.30pm on Friday.

The following day sees the gravel action with teams leaving the Mercury Bay Multi-Sports Park at 7am to contest 135km of special stages punctuated by three services at the Sports Park.