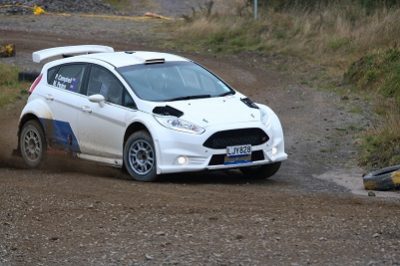 The Campbell Rallysport team have been building the spectacular looking Roofing Store backed Fiesta compliant to the AP4 regulations, since the start of the 2017 season. For the debut, the car will use a 2-litre engine while parts to build the correct 1600cc engine come from overseas.

The team had a chance to test the car last week, completing more than 150 kilometres of testing without any hint of an issue. Even more positive, Campbell immediately felt comfortable with the performance of the car.

Another change for the team is the return of Malcolm Peden to the co-drivers seat, the pair having worked together previously in 2011. Peden brings a large amount of experience, including recently having competed with World Championship star Hayden Paddon.

“The new car is absolutely fantastic, it’s really like a proper rally car, rather than the production-based Mitsubishi we ran previously. Everyone that has put in so much effort to get this car running has done a fantastic job and that shows with the car running faultlessly so far,” says Campbell. “It will be awesome having Mal in the car, not only does he have a heap of experience but he also works incredibly well with the whole team.”

The Lone Star Rally Canterbury kicks off with a ceremonial start outside Lone Star in Christchurch’s Manchester Street from 4pm on Saturday. The following day, teams will take on 10 special stages in the Ashley and Okuku Forests before returning to Manchester Street for the finish from 7pm.