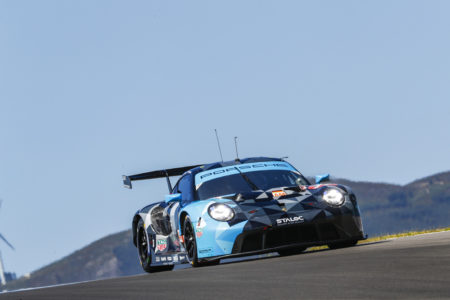 The Porsche works team is well prepared as it travels to round three of the FIA World Endurance Championship (WEC) in Monza. The high-speed circuit in Italy hosts the world endurance series for the first time. At the six-hour race on July 18, the squad of the Stuttgart sports car manufacturer has a clear goal: the Porsche GT team aims to recapture the top spot of the world championship rankings which it lost at the previous race in Portugal. In the GTE-Pro class for factory teams, Porsche fields two ca. 515 PS 911 RSR. In the GTE-Am category, the customer teams Project 1, Dempsey-Proton Racing and GR Racing campaign a total of five 911 racers.

“At the last race in Portimão, we struggled to find the right use of the tyres. The team looked at the causes and took appropriate measures to avoid something like this happening again,” explains Pascal Zurlinden, Director Factory Motorsport. “We firmly believe that we’ll find our way back to our former competitiveness in time for the Monza race and that we’ll reclaim the championship lead at the home race of our main rival Ferrari in Italy.” After two of six rounds this season, Porsche ranks second in the manufacturer’s classification, just 18 points off the top of the leaderboard.

“We’re all excited about the event on the storied circuit with its very special flair. It’s sure to be a highlight,” says Alexander Stehlig, Head of Operations FIA WEC, as he looks ahead to round three of the season. “Still, we’re facing a major challenge. Our Porsche 911 RSR is particularly strong in the semi-fast and fast corners. Unfortunately, there aren’t many of these passages at Monza. The focus is not on downforce or aerodynamic efficiency, but rather on the sheer top speed and braking performance of the cars. We have to respond to this with a special setup. I’m confident that we’ll be competitive in Monza and score many world championship points.”

The race
The Autodromo Nazionale di Monza has a long and rich history. The first races in the Royal Park were contested as early as 1922, at that time on an oval circuit. The remnants of this are still admired today. The now 5.793-kilometre variant of the circuit with its long straights is geared towards high speeds. Since 1950, a total of 70 Formula 1 Grands Prix have been held on the circuit near the northern Italian metropolis of Milan. The FIA WEC conducted its official tests here prior to the 2017 season – the so-called prologue in Monza. This year, a six-hour race will be held for the first time. As part of the preparations, the Porsche GT Team can draw on data and insights from the customer teams contesting the European Le Mans Series (ELMS). The European endurance series has raced regularly on this spectacular circuit since 2017.

The Porsche GT Team drivers
Sharing driving duties in the No. 91 Porsche 911 RSR are Richard Lietz from Austria and his works driver teammate Gianmaria Bruni. This is the first time the Italian races on home turf with the FIA WEC. The duo currently ranks fourth in the drivers’ championship. Their brand colleagues Kévin Estre and Neel Jani from Switzerland lie second in the world championship. Sharing the cockpit of the No. 92 car, the pair won the season opener in Belgium and has so far posted pole position at all GTE-Pro qualifying sessions in 2021.

The customer teams
Dempsey-Proton Racing fields two Porsche 911 RSR at round three of the WEC season. Works driver Matt Campbell from Australia joins forces in the No. 77 car with the team owner Christian Ried (Germany) and the former Porsche Junior Jaxon Evans from New Zealand. The all-British driver crew Michael Wainwright, Ben Barker and Tom Gamble compete for GR Racing in the No. 86 car. Campbell (2016 Champion), Evans (2018 Champion) and Barker are all former competitors in the Porsche Paynter Dixon Carrera Cup Australia series.
Alessio Picariello from Belgium and Andrew Haryanto from Indonesia helm the No. 88 sister car with Germany’s Marco Seefried. Project 1 campaigns the No. 46 Porsche 911 RSR with Norwegians Anders Burchardt and Dennis Olsen as well as Axcil Jefferies from Britain. In the No. 56 car from the German customer team, Egidio Perfetti from Norway shares driving duties with the two Italians Matteo Cairoli and Riccardo Pera.

TV and Internet coverage of the race
For a fee, the official FIA WEC app offers live streaming and live timing.