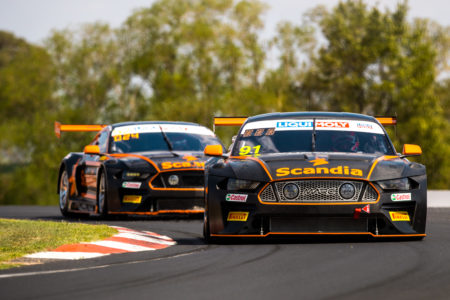 McLeod’s previous teams Racer Industries and MARC Cars Australia have had a long history of debuting future stars at Mt Panorama . “We’ve had quite a few guys through our program. Chaz Mostert, Ash Walsh, Scott Pye, Chris Pither and Will Brown just to name a few. So I feel as though we’ve got a good guage.” commented McLeod.
The job that Aaron and Broc did this last weekend at Bathurst was truly phenomenal. It’s easy to see why they have been winning in recent times”
“I mean, this is an A-Level event, the guys are driving a fast car, it’s a bloody hot day, you can see the mistakes that world class Pro drivers with 20 years experience were making, and they just performed perfectly. Fast, and no mistakes, the car didn’t leave the track all weekend”
“Either of these guys could be the next Chaz Mostert or Nick Percat…in fact I’m sure of it”. They should be on everyone’s list.
I mean, if you look at their Karting careers they are both guns. They have both been winning since they were very young. They’ve both won in feeder categories, racing comes so naturally to them”

Having Nick Percat in the car with them clearly helped , he was able to pass on lots of experience. For sure, Nick was the corner-stone of a fantastic result, to finish only four laps down, from 310 laps to the factory Bentley team, just outstanding. But he didn’t do it by himself. The two boys held their own and should be equally credited.”

The SCANDIA Racing by Racer Industries no 91 entry completed 310 laps in the Liqui Moly Bathurst 12 hour. It was the only classified finisher in the Invitational class and placed 15th outright from 40 starters. The team took class Pole Position, infact breaking the class minimum lap time with a mid 2minutes and 4 second lap time credited to Percat.