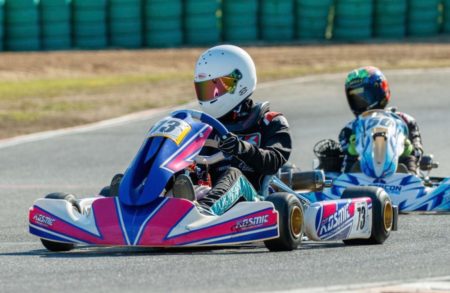 Tyler Calleja is name that the world of karting is about to find out about.

Calleja is a young driver who is only twelve months into the sport and starting to bob up on karting radars.

Tyler took to the fourth round of the Golden Power Series over the weekend in what was only his ninth race meeting in his career.

Calleja running under the CC Racing power and the 5-Eight Motorsports driver coaching program was looking to put his best foot forward.

Calleja had his first racing session of qualifying in the middle part of the Saturday against over twenty-five of the best Junior Heavy drivers in the state.

The CC Racing powered engine was working well and the young driver was able to make his way into the top 10 quickly and then put himself in the top five as the session went on.

Tyler was doing a superb job putting himself right in the heat of battle and set the fourth fastest time, putting him off the second row of the grid.

Heat one was the first race on Saturday afternoon and Calleja knew his start was going to be crucial.

The 5-Eight Motorsport driver got a great start moving up to third spot on the opening lap, trying to go with the top-two.

Tyler wasn’t quite able to go with the front two in the middle stages, but was close in on the final few laps to make it a three-way battle at the front.

In an awesome performance, Calleja was able to jump up to second spot in the dying laps and cross the line in second spot.

Calleja was riding high after the opening heat and was looking to finish the second heat on Saturday afternoon in similar fashion.

The CC Racing powered driver didn’t get the same start as heat one dropping back to fifth spot on the opening lap.

Tyler sat in fifth spot majority of the race before making an important move for fourth spot on Lap 6.

Calleja was able to cross the line in fourth spot overall.

Sunday morning came around and Calleja was off the front row of the grid for the final heat race.

The 5-Eight Motorsport driver got hung out to dry off the start line and dropped back to position seven at the end of the opening lap.

Tyler worked hard but couldn’t make up any spots in the first half of the race.

Calleja was able to put in another solid back end of racing, moving back up to fifth spot by the finish and putting him out of third for the final.

The 12-lap final was where Calleja was looking to bring home a podium finish in the tough field.

The CC Racing supported entry slotted into third spot and was trying to keep on the back of the top two drivers.

Tyler put in a brilliant showing, staying in third spot and keeping tabs on the front two across the race.

Calleja finished his weekend with a brilliant result of third spot overall and his maiden open level podium.

“Super proud of Tyler only having jumped into a go kart a year ago and already achieving a podium at a Golden Power Event against much more experienced drivers,” Paul said.

“This was only Tyler’s ninth event so we’re really excited for what the future holds.”

Calleja will be a driver to watch for the remainder of the 2022 season.