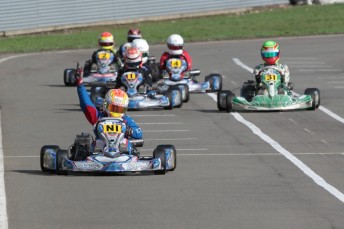 Caleb Cross has seen out his karting career in stunning style by winning the Junior 100cc Yamaha title at the New Zealand National Sprint Championships in Blenheim last weekend.

Cross’ achievement was all the more significant for the fact that his father Hamish won the same title in 1992. On that occasion, Hamish led home his great friend, the late Jason Richards to win at Hawke’s Bay and 22 years later was justifiably emotional following his son’s resounding success.

In a highly-competitive field, Cross qualified fourth at the beginning of the weekend with the first five karts covered by two-one hundredths of a second on the 930m circuit.

After a best finish of second in Heat 2 of the weekend, Cross lined up fourth for the all-important final. Armstrong and New Zealand Schools’ class champion Ryan McPherson battled for the lead in the first half of the race but Cross maintained a watching brief in third. On the 10th lap, Cross overtook McPherson for second.

Cross kept the heat on Armstrong in the closing stages and showing remarkable confidence, waited until the final lap to pounce on his rival. When Armstrong guarded the inside line heading into the fast corner near the pit entry, Cross pulled off an incredible pass around the outside to take the lead while Cranston soon took advantage and also moved ahead of Armstrong.

Cross also competed in the Junior Rotax class on the weekend, qualifying sixth and finishing fourth.

Turning 14 in July, Cross has now concluded a successful karting career which has yielded multiple Island and National titles to focus on a career in car racing. Cross will continue testing in Formula Ford with plans to progress to the Australian Formula Ford series.

Cross’ ambition is to race V8 Supercars and aspires to emulate his countrymen Greg Murphy and Scott McLaughlin, both of whom have been managed by Caleb’s current management agency, Velocity Management Group.

“This is the highlight of my karting career and a fantastic way to end it. I have enjoyed my time in karts and this weekend is the best memory. To see Dad so emotional after the race was pretty huge, and it’s special to see just how much it means to him. We were competitive all weekend and my approach was to keep finishing to give myself a good starting position for the final when it counted, and it worked. I just tried to keep pressuring Marcus and I knew I could pass him on the outside, so when the opportunity came I just had to go for it. I am so thankful to everyone who has helped me so far, BNT, Fuchs, Dayco, my long-time supporter Graham Wehner, Velocity Management Group and most importantly, my family.”