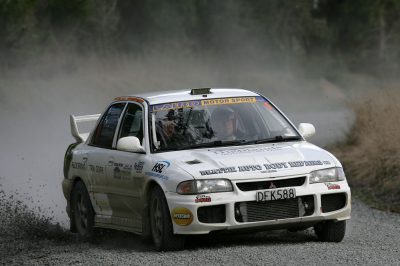 Andrew Graves and Jared Leebody of Gore on their way to win number three at the Catlins Coast Rally last year on a day when they won five of the six Special Stages in their Mitsubishi Lancer EVO 3 pic: Euan Cameron

Defending Catlins Coast Rally champion, Andrew Graves of Gore, rates the Catlins Rally as one of his favourites and when you look at his record in the event it is little wonder.

Last year’s victory was his third, following wins in 2010 and 2013. He has also been runner-up twice, in 2012 and 2016 – when he fell as low as 35th place early on after copping the worst of the snow and ice – while he was third in 2011. It’s a phenomenal record, particularly when you take into consideration that his Mitsubishi EVO 3 is the oldest car at the pointy end of the field and that Graves is not a regular behind the wheel due to the fact he spends much of the year co-driving for others. In fact it was as a co-driver he scored his ‘other’ victory in the Catlins Coast Rally when he was co-driver for 2005 victor Derek Ayson while in 2014 and 2015 he again competed as a co-driver in the event alongside Tony Quinn.

For the last two years he has returned to his co-driving roots in a big way, sitting alongside Christchurch driver Josh Marston in the Holden Rally Team as they campaign in the Brian Green Property Group New Zealand Rally Championship and some rounds of the MRF Tyres Mainland Rally Series. Graves currently leads the co-driver points in both championships.

It’s a very busy schedule and Graves freely admits he could not do it without “the love and support of his family.” Asked about his success – he has also won both the Rankleburn Rally and the Lawrence Rally twice each, he says, “I don’t have a secret, I just make sure my gear and my health is right plus you need a bit of luck.”

Looking ahead to this year’s rally he says, “I would like to give it another nudge although the car is a year older and so am I. I want to go out and give a good performance and do the best we can. I’ll be there with bells on.”

Catlins and the Lawrence Rally are his two favourite events and he looks forward to Catlins every year.

Jared Leebody has been Graves’ co-driver for each of his Catlins wins and will be alongside in the co-driver seat again this year while Graves’ son Hayden has sat beside his father and shared victories with him at both Dusky Forest and Lawrence.

In his limited outings of late Graves has won the Eastern Southland Car Club Rallysprint at Popotunoa and the recent Otago Sports Car Club Whare Flat Rallysprint, finishing ahead of Emma Gilmour with Hayden alongside again.

Graves got the motorsport bug when first co-driving for Ayson and started driving in 1998 with a Mazda RX3 that he describes as “not the fastest car.” He did his first rally, the Mount Linton Rally, in the car plus club events. That was followed by a MKII 1600cc, four-door, Ford Escort, which he says he thrashed before upgrading and beginning his successful career in the EVO 3.

One thing that Andrew Graves never forgets is the people who help and he is always quick to thank his sponsors, family and friends for everything they do for him.

The rally will begin adjacent to Owaka Motors in Campbell Street, Owaka, at 10am on Saturday 11 August with competitors facing six high speed Special Stages over a total of 150 kilometres before the event concludes in Owaka at 3.44pm. The rally is Round 6 of the MRF Tyres Mainland Rally Championship and part of the Eastern Southland Car Club Rally Championship.