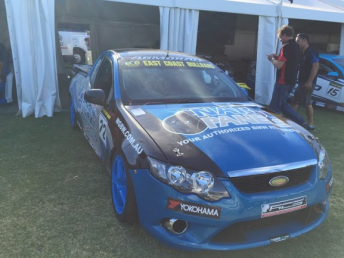 Danny Buzadzic, in his Western General Bodyworks Ford Falcon Ute, has charged from 27th to 14th in Race 2 of the V8 Utes at the Clipsal 500 today.

After a fuel leak forced Buzadzic to the back of the grid for Race 2, the Ford driver skilfully avoided carnage in the race as he climbed through the field.

It started on the opening lap as Buzadzic moved into the top 20 in the first few corners.

“I made a great start and went around the outside into Turn 1, just like the first race, and picked them off one by one in the first few corners,” Buzadzic said.

The Western General Bodyworks driver gained further positions on lap two, as he moved to 16th by the end of lap 5.

The Ford driver wasn’t finished there as he gained another three positions on the last lap.

A slowing Andrew Fisher, and a crash between Gerard McLeod and Cameron Wilson at Turn 8, gave Buzadzic a top 15 finish.

Buzadzic was lucky not to be involved in the incident as he was right behind the duo when they hit the notorious Turn 8 wall.

“It was frightening, but thankfully, I could see it happening in front of me, and I had enough time to drive away from it,” Buzadzic said.

Buzadzic crossed the line 13th, although he received a five second penalty, for kerb hopping the Senna chicane four times.

He was classified 14th in the order, and paid credit to his team.

“The Western General Bodyworks Falcon Ute is handling really well. It’s the best it has been in my career and I can point and steer it very easily.

“It’s great to have the car in one piece after a big race around here. The result was good and my times were great.”

“A top ten finish would be an awesome way to finish the weekend,” Buzadzic concluded.

The final race of the East Coast Bullbars Australian V8 Ute series will be held tomorrow morning at 9:00am local time (9:30am AEDT). It will be live on Fox Sports and on delay on Channel Ten.