Busy weeks ahead for the Fibertech Rally team

Busy weeks ahead for the Fibertech Rally team 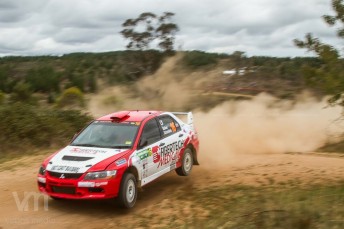 The next three weeks is going to be very busy for the Fibertech team, with driver Gerald Schofield and co-driver Ray Baker participating in both the World Rally Championship event at Coffs Harbour and following straight into the Australasian Safari in Western Australia.

The duo will be campaigning the Mitsubishi Evo 9 in the 4wd National series at Coffs Harbour, trying to gain back a few points after a DNF in Rally QLD.

The car has been thoroughly gone over by the team engineer Scott Preston and is in top shape to take on the fantastic roads around Coffs Harbour.

Schofield and Baker will be aiming to fight for position with Mike Bailey and Matt Harriot who they have had some good battles in the past.

Hopefully with a good finish at the event the Championship will still be alive going into Rally Victoria.

The following week the now V8 engined Dmax will be fighting it out through the outback of Western Australia, Schofield and Baker had a 7th place finish last year in the Safari and are looking at a good result this year.

The team shookdown the new engine a few ago and were quite impressed with newfound speed.

“The Australasian Safari is a tough event, you need to have your wits about you all times” said Baker.

“You may have 10km between calls but you are reading the road, making sure that you are actually on the right track.

“It can be very easy to wrong road and lose 30 mins or so in the process.”

During the WRC and when we have phone reception in Safari we will be active on Twitter with stage and event updates, follow us @raybak101 or you can check out our facebook page, Fibertech Medical Australia Rally Team.