Busy season ahead for Harding Racing

Busy season ahead for Harding Racing 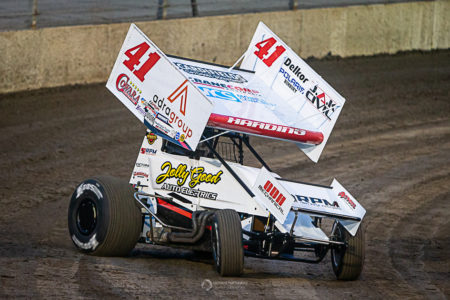 After a mixed bag of results in their 2020-21 season debut during last Saturday night’s opening Maddington Toyota Sprintcar Series round at the Perth Motorplex, the Harding Racing team, which is represented by Daniel Harding and Trevor Jolly, remain excited about the rest of the season ahead.

“It has been a busy off season and the team and I had only finished off my own car the night before we were to hit the track, so I was happy to finally get back out on the track,” expressed Harding, who had started the night at the Perth Motorplex in the best possible fashion by topping the time sheets in qualifying.

“Although I had a few dramas on the first night, I was really happy with the car’s speed and the goal for the rest of the season is to build on this and run consistently at the front of the field.

“When it comes to consistency, I really struggled in that area last season, after I had started the season very strongly and then in the second half of the season, I didn’t have much luck on my side for a mixture of reasons. At season’s end, I finished up fourth in the final Maddington Toyota Series point standings, but for this season I’m not really focusing on the point standings and more so on feature-race wins.”

As Harding’s team-mate and good family friend, Jolly is aiming to improve during his second season in 410 Sprintcars, which is going to include running selected Speedcar race meetings throughout the season.

“I ran 10 race meetings last season in Sprintcars, and the goal for this season is to run as many race meetings as possible and improve on a regular basis,” commented Jolly, who steered his WA # 18 Adra Group / Jolly Good Auto Electrics / Cowara Contractors supported Triple X car to a 12th place finish in last Saturday night’s Maddington Toyota Series opener.

“Apart from my Sprintcar commitments this season, I’ll be running the Speedcar and I’m looking forward to what is going to be a busy season, and without the ongoing support from the Harding family none of this would have been possible.”

For this season, the Harding Racing team is well supported by an array of sponsors, which is headed by the Adra Group, Jolly Good Auto Electrics, and Cowara Contractors.

“We can’t thank all of our sponsors enough for their support this season,” praised Harding, who is taking part in his 10th season of 410 Sprintcar racing.

“They are all helping make our program possible this season and both Trevor and I are hoping to represent them the best we can – both on and off the track.”

The next outing for the Harding Racing team is going to be this Saturday night at Collie Speedway, where Jolly will be racing the Speedcar in the annual Laurie Matthews Memorial event. A fortnight later on the Saturday night of November 14, both Harding and Jolly return to the Perth Motorplex in the 410 Sprintcars for the second Maddington Toyota Series round.