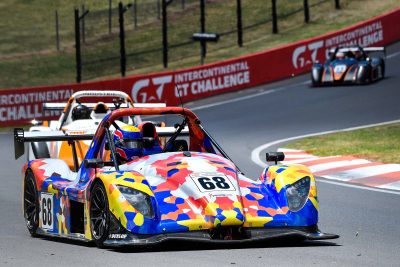 Like all good things, they ultimately come to an end.. So too Peter Paddon’s winning streak at Mount Panorama, the three-time Radical Australia Cup champion forced to settle for a third-placed finish during the second race at Bathurst’s Mount Panorama circuit, the win going to Sydney’s Kim Burke after a torrid race that claimed the scalps of race one sensation Chris Perini and the returning Peter White.

For the fifth year in succession, the Radical Australian Cup season kicked off at the Bathurst 12 Hour, but unlike past years, teams had just one combined practice/qualifying session to set the grid for the two 45-minute races, with race one classified by the fastest lap set in that session, race two’s grid coming from the second fastest lap – there were no second chances.

Ultimately reigning champion Paddon claimed pole position, but in part due to strategy, Paddon set a time just four tenths of a second slower than his outright lap record, on ‘old’ tyres he’d used during the final round of the 2017 season in New Zealand.

What he hadn’t factored in though was the pace of RAC Bathurst rookie Chris Perini, the 2017 NSW SuperSport runner-up falling just nine tenths short of Paddon’s pole time, before pushing him all the way to the line in Friday’s opening race, in the process leading almost half the 18-lap race distance.

Paddon wasn’t about to make the same mistake a second time, adopting a brand new set of the Dunlop control tyres for race two in an effort to use the extra grip to maximise his pace – he wasn’t messing around!

Off the start Paddon moved across slightly to achieve a better entry to turn one, almost allowing Kim Burke to move through on Perini into turn one.

Sadly, for the second race in a row – and this time one corner earlier – Michael Whiting spun on the exit of turn one on cold tyres whilst comfortably sixth.. He had a big job ahead of him to recover!

Up front Paddon was using every bit of his extensive Bathurst experience to gap the field on cold tyres, most drivers confirming that it was taking three to four laps to get their control Dunlops up to maximum operating temperature, so experience was key in the early laps.

By lap four he was up by five seconds over the battle between Perini and Burke, with Burke pushing the new rookie hard having clearly found something to his liking with the setup of the car overnight.

By lap seven though Paddon’s lead – which would have been good enough to see him make his compulsory pit stop [CPS] and rejoin ahead of Perini after new regulations for 2018 saw the top five drivers penalised an additional ‘compensation time’ during their CPS, Paddon facing a five second longer stop than his young rival – was negated with the appearance of a Safety Car for Peter White.

As he had done in race one, 2015 outright Bathurst winner Peter White was running around comfortably inside the top five, battling long-time rival Nick Kelly for fourth when it all came unstuck on top of the mountain.

“I ran just a tad wide at Skyline, rode the kerb then suddenly the car snapped left and took off into the wall,” White admitted. “I’d done the same thing yesterday [riding the kerb] and it was fine so I wasn’t concerned about using it, but I must have had a bit of steering angle and that was all it needed. It was a big knock to the car, but I’m okay,” he explained afterwards.

The field spent three laps behind the Safety Car whilst recovery crews removed White’s FIRST NEON car from the circuit – at the same time the pit window had opened, so the bulk of the field streamed down pit lane the following lap for their compulsory stop, but not before Paddon had made a clean getaway to be more than four seconds up on the pack which had been caught behind Greg Kenny.

Sadly for Kenny, his car broke a driveshaft almost immediately after exiting the dummy grid for the start of the race, forcing him down pit lane on the opening lap, the well drilled RA Motorsports team taking just four laps to replace it to be able to send him out to turn laps, but between Paddon and Perini.

Paddon was one of the first down pit lane to effect his stop having felt he held enough of an advantage to be within fighting distance of Perini and Burke once the stops were completed, but Perini didn’t pit, he put his head down and charged in an effort to breach the gap now that Burke was no longer filling his mirrors.

Ultimately his pace was so good that he started to catch the slower cars, getting caught behind David Crampton – who had taken over the #3 Vantage Freight entry from co-driver Anthony Davis during the stop – on the run down the mountain.

100% committed to breaching the gap to leader Paddon, Perini became very animated, waving madly at Crampton to move over, but with very little opportunity to do so, Crampton held his line down to Forrest’s Elbow before having space to allow Perini through.

The situation obviously had an affect on Perini who continued to charge, going past the pit entry not once, but twice, to ultimately miss his opportunity to make his compulsory stop during the 20-minute window. With a penalty post-race pending he continued to charge, but just a couple of laps later he was hard into the barriers in the Esses, coming to rest sideways to the flow of traffic just a little bit further down the circuit than where Peter White had gone in earlier.

That was game over, and ultimately the end of the race as with less than five minutes remaining, the recovery crew were never going to be able to clear the stricken #81 SR3 within the allocated race time. Fortunately – like White – Perini wasn’t hurt, although shaken up and bruised, officials helping him to limp away from the car.

Whilst all this was going on though, Kim Burke had emerged from pit lane after his CPS in second position behind once-a-year ‘specialist’ Nick Stavropolous who had inherited the lead after being ‘penalty’ free from the opening race having finished outside the top five.

Burke had left pit lane five seconds earlier than Paddon – whom he’d pitted five seconds behind by virtue of his third placed finish in race one – and he was quickly onto the tail of Stavropolous who gave very little challenge in the end as Burke moved through to the front, but Paddon could do little about the two leaders as the Safety Car reappeared for Perini’s accident at the top of the mountain, ending a winning streak that had stretched to Friday’s race win – his seventh consecutive SR3 victory on the mountain.

Fourth across the line after an incredible drive again, was Michael Whiting, although post race he was handed a penalty for overtaking too early after the Safety Car, as was Chris Medland who had finished a lonely sixth behind Nick Kelly.

With Whiting and Chris Medland demoted post-race, Tony Haggarty was classified fifth – his best ever finish on the mountain (one better than 2017) – with Bill Medland sixth having recovered from a second rear-of-field start after a header issue during qualifying left him sidelined and unable to record a timed lap.

Rowan Ross was another who had made a recovery, taking seventh in his brand new 2018 SR3RSX after the RA team had rebuilt the left side overnight courtesy of his brush with the wall at turn two on the opening lap of the season having been forced to avoid a spinning Michael Whiting.

Phil Ansleine was a consistent eighth after another great battle with Peter Clare who unfortunately was unable to return to the fight after the CPS with officials noticing a rear light failure on the car forcing him to stay in pit lane a few laps longer as the RA Motorsports crew effected repairs.

Sue Hughes was a delighted ninth, having made considerable gains on her past Bathurst experiences thanks to removing aero drag from the car, something which at first had kept her busy, but as the laps wore on she became more and more comfortable with how the car was moving around.

David Crampton and Anthony Davis rounded out the top ten after a consistent effort through the 45-minute race, staying out of trouble and gaining valuable championship points, whilst Michael Whiting, Chris Medland and Peter Clare were the final classified finishers.

Ultimately Paddon was given the round win – despite sharing a win and a third placed finish with Burke – by virtue of his top qualifying effort and his two fastest race laps. Burke was second with the returning Nick Kelly third thanks to a fifth and third placed finish.

The championship now moves onto round two at the all-new Bend Motorsport Park in South Australia on 13-15 April.

What the drivers had to say:

1. Kim Burke (Radical Australia Radical SR3RS)
“The mechanics worked very hard on the car overnight and transformed it, it was fantastic today, balanced, fast and easy to drive. I had a great battle with Chris Perini early on, but unfortunately he had an incident so we couldn’t finish it off. It’s all about the championship this year. I’ve been close a couple of times in the past, but this year I want to finish every race and be in the fight for the title.”

2. Nick Stavropolous (Radical SR3)
“That was incredible, but I didn’t actually realise I was in front when Kim [Burke] caught me, my crew didn’t tell me, although I probably wouldn’t have been able to keep him behind me for long anyway, but what a great recovery after a tough day yesterday. Third here in race two last year, second this year.. I think I should start to race more than once a year, this is brilliant!”