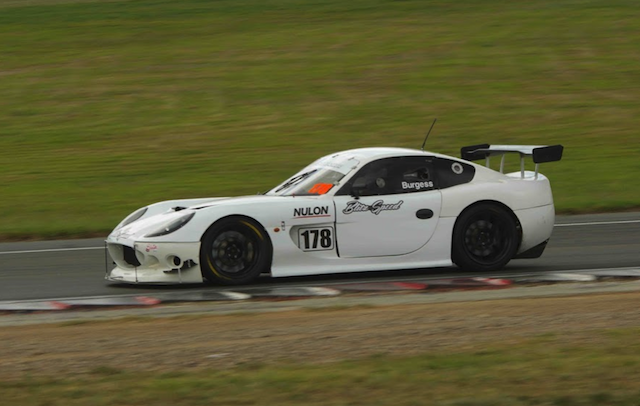 MEDIA RELEASE: The father-and-son team of Craig and Adam Burgess have taken out yesterday’s Valvoline Wakefield 300 endurance race in their Ginetta G50, becoming the first team to win the event from pole position.

After topping times in Saturday afternoon’s Top 10 Shootout and claiming the Supashock Pole Position award, the Burgesses were involved in a thrilling scrap with defending winners Steve and Jake Shelley (Lotus Elise) for the first half of the race. The two cars were rarely separated by more than a couple of seconds and swapped the lead on several occasions, completing the first of their two compulsory pit-stops under Safety Car conditions on lap 28.

The race seemed to be shaping up for a flat-out sprint to the line until Jake Shelley brushed a backmarker, causing a rear suspension failure and ultimately retirement for the Lotus on lap 85.

Capitalising on the Shelleys’ demise were brothers Grant and Iain Sherrin in their BMW 135i, who also finished as the best of the Division 2 runners. With consistent lap times and smart pit strategy, the Sherrins remained on the lead lap throughout the entire race.

Third place went to the Lotus Exige of Glenn Townsend and Anthony Soole, who bounced back from their shattering first-lap retirement from last year’s Winton 300. Townsend and Soole were thankful just to be on the grid after a gearbox breakage in the Top 10 Shootout necessitated an overnight repair job.

The Future Racer of Nathan Jess and Kerran Dal-Maso finished fourth, while Daniel Reynolds and Matt Stubbs finished an impressive fifth in their Mazda MX5, winning Division 3 and defeating a number of faster cars.

Despite the large field, there were very few incidents in the race, and only two Safety Car interventions, both of which were caused by the Terry Denovan/Geoff Stockley Holden Commodore stopping on the circuit with mechanical problems.

Brendan Vinckx took a clean sweep in the Series X3 NSW races, winning all three from lights to flag to take the round win from Adam Bryant, and impressive debutant Tom Manwaring.

In Production Touring, it was Daniel Oosthuizen (Mitsubishi Evo IX) who took three of the four race wins, although he was defeated in Race 2 by Greg Symes (also in a Mitsubishi Evo IX), who made a blinder start to jump to the front of the field. Barry Graham enjoyed a consistent weekend, driving his BMW M135i to top three finishes in each race.

Ian McAlister took overall honours in the Stock Cars with three race wins, with Shane Harris taking the other race victory; Brian Walden was also in the mix with a trio of second-place finishes.

The next major race meeting at Wakefield Park is the opening round of the CAMS NSW State Championships, 5-6 March.