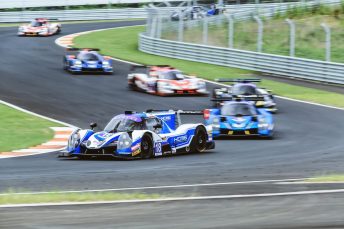 Australia’s Josh Burdon concluded the opening event of the FRD LMP3 Series with laudable drives in both races to bring home two podium positions alongside teammate Neric Wei for KC Motor Group (KCMG). The first round of the newly launched Asian prototype series was held at Zhejiang Circuit, China – where the highly anticipated two-race event format proved to showcase one of the most competitive fields seen in Asia.

Josh Burdon’s debut in Prototype racing saw him adapt quickly to a new machine, posting impressive times firmly in the top 3 all throughout the weekend. Meanwhile, teammate Neric Wei did not fail to impress in demonstrating his strong driving skills in the new Ligier LMP3.

The opening race saw Wei take the wheel at the start and make a great opening few laps showing good speed and handing over the car to Burdon in 8th place. Burdon then stormed through the field moving up several places when a red flag was called due to sudden torrential conditions which brought a premature end to the race with the KCMG entry eventually taking home third place.

The team returned the following day for Race 2, with the #18 LMP3 starting from third position. Under dry circuit conditions, Burdon made a good start and quickly moved into second position after passing Ma Qinghua in turn 1. After half race distance it was Beche and Burdon out in front after both setting identical fastest laps of 1:27.239 when pit window opened. Wei then took over control of the #18 and after a clean pit stop, delivered a strong impressive stint where he fiercely fought to the end and held onto second spot, placing them on the podium for the second time over the weekend.

Josh Burdon: “A big thanks to KCMG and my teammate Neric for doing a very good job this weekend. I enjoyed my first sportscar race. It is extremely competitive out there and I can not wait to continue working with this momentum into our next race in Shanghai.”

Neric Wei: “It’s a great honour to represent KCMG in the FRD LMP3 Series this season and to have Josh as my co-driver. We had a strong weekend at Zhejiang and its only the beginning – we are looking forward to fight for victories in the next events!”

Round 2 will be held at Shanghai International Circuit, July 28-30.