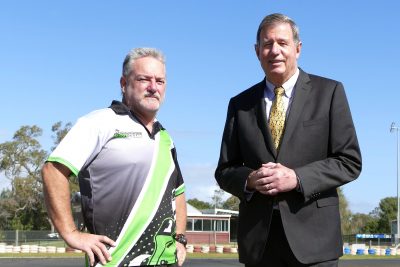 The City of Bunbury will become a hive of activity for the karting fraternity next monnth with the Bunbury City Kart Club to host the 2018 Make Smoking History WA Kart Championship.

With more than 250 Competitors expected to flock to the region, it is expected that up to 1,000 drivers, mechanics and support personnel will be heading to the region for the prestigious event.

To be held across three days, the WA Kart Championship is the most prestigious event held in the State and City of Bunbury Mayor Gary Brennan is excited that Bunbury has been chosen as the host venue for the event.

“This event is a real boon for Bunbury and the Bunbury Geographe region and I welcome all competitors and their families to this wonderful place we call paradise,” Mayor Brennan said.

“It is also a real credit to the Bunbury City Kart Club and its members for securing such an exclusive event.

While the event is a little under two months away, Bunbury City Kart Club President Mick Kenny and his dedicated team have already been preparing the Club’s venue for several months.

“It is always an honour to be able to host the WA Kart Championship and when we do get the opportunity we want to make it a huge success for everyone involved,” said Kenny.

“While the actual Championship event may only be held on one weekend in September, over past few months we’ve seen a significant increase in the number of competitors travelling to Bunbury in preparation.

“To have the support of the City of Bunbury and all of our other partners is a huge benefit for the Club. We look forward to providing some great flow on benefits to the local Community leading up to, during and after the event.”

The 2018 WA Kart Championship will be held on September 22-24. Lead up events have been conducted each month throughout the year with the final ‘shakedown’ event scheduled for the weekend of September 1/2.

The Bunbury City Kart Club is located on the South Western Highway (adjacent to the Speedway).

More information on the Bunbury region can be here at www.visitbunburygeographe.com.au